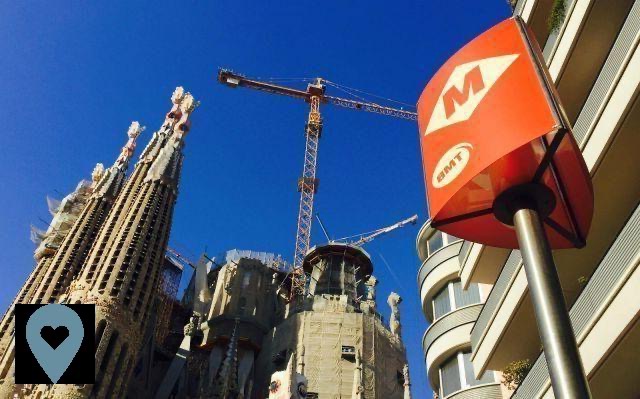 Understanding the Barcelona metro is essential for a good vacation.

Barcelona's 11 metro lines (eight classic lines and three land trains) are as fast as any metro system in Europe and, perhaps most importantly, they are air-conditioned.

The only complaints you'll hear, aside from the spoiled locals who have never been to New York or London, are the tourists who get scammed buying individual tickets at € 2,40.

After reading my guide to the Barcelona metro, you will not be one of them.

You can also get it at the Barcelona Tourist Office, at the airport or at a metro station.

Barcelona metro starts every day at 05:00 am in the morning and the last one leaves at midnight. On Fridays and holidays, the metro runs until 02:00 am


Service is limited on Christmas Eve until 23:00 pm

To buy tickets for the Barcelona metro, you must use the machines located in the corridors of the stations. The tickets are valid for the entire Barcelona transport network, including the Montjuic metro, bus, tram and funicular lines.


The metro from Barcelona airport to the city center has an additional cost: € 5,15.

Tickets can be purchased in cash or with a credit / debit card.

All entries have 75 minute validity.

For information: On March 1, the T-Familiar will be released, it is a multi-person ticket that allows 8 trips within a period of 30 days for € 10.


Tourists tend to buy the all-inclusive transport card Hola Bcn: with unlimited travel by metro, bus, tram, funicular and transfer to the airport. Prices start from € 6,80 per day.

Can save 10% on your Barcelona Travel Card buying it directly online:

Zone 1 includes the city center and almost all the main attractions of the city and the best areas to stay. The chances of you leaving this area are extremely low.


Here is the map of the areas of Barcelona.

You can buy single tickets for € 2,40, but the price and the queues at the ATMs are far from ideal. I always suggest tourists to have a discounted transportation card that gives you unlimited access to the subway like the Hello Bcn or the Barcelona Card. They save you time and money.

You can still take the T-Casual, but unlike previous maps, it is not valid for the airport.


Find out which discount card is right for you by clicking the banner below:

The new Barcelona metro line connects the city with the two terminals of El Prat airport.

This is not the fastest line and it will not get you to most of the central hotel and hostel areas of the city. It is mainly used for residents returning home on the outskirts.

If you want to go to the very center of Barcelona, ​​you will have to change lines.

connections: the orange line meets the red line (L1) at Torrassa station, the blue line (L5) at Collblanc and the green line (L3) at Zona Universitaria.

My favorite line crosses the city from east to west and stops at some of the great meeting points of the city as the Arc de Triomf (Parc de la Ciutadella), Plaça Catalunya, Te Plaza of Spain.

Finding a vacation apartment along this line is very convenient, as you will be able to get around easily.

connections: the red line meets the yellow line (L4) in Urquinaona, the green line (L3) in Plaça d'Espanya, the purple line (L2) in Plaça Universitat and the blue line (L5) in Sagrera and Plaça de Sants .

This line connects the neighboring town of Badalona in parallel.

The main points of interest on this line are the Sagrada Familia, the Paseo de Gracia and its famous Gaudí buildings: La Pedrera and Casa Batlló, the glittering Eixample district and the raw and accessible Raval.

connections: the purple line meets the yellow line (L4) and the green line (L3) at Passeig de Gracia, the blue line (L5) at Sagrada Familia and the red line (L1) at Plaça Universitat and Clot.

This line turns and forma de u around the city and serves several major attractions.

Along the green line you will find three stops on the famous Rambla: Plaça Catalunya, Liceu and Drassanes. You will also have access to the main shopping area of ​​Passeig de Gracia and Diagonal. A few stops will take you to Plaza de España and the Magic Fountain.

You will also visit the Parc Güell (Vallcara), the FC Barcelona stadium, the Camp Nou and the Parc del Laberint d'Horta (Mundet).

connections: the green line joins the blue line (L5) in Diagonal, the red line (L1) in Catalunya and Espanya, the yellow line (L4) in Passeig de Gracia and the purple line (L2) in Parallel and Passeig de Gracia.

The most popular metro line in Barcelona and possibly the most useful for reaching the best beaches in the city. Pay attention! Especially in summer, the line can be very crowded.

Along the yellow line you will find the bohemian neighborhood of Gracia, the central square of the Gothic Quarter and its Cathedral of Barcelona, ​​the upper districts of the city and the Bunkers viewpoint, as well as the nightclubs and the casino of Olympic port.

If you are looking for a great beach vacation, choose your accommodation along the yellow line.

I would call this the line "business" because it brings people from residential areas to the center.

The main stop is the largest station in Barcelona: Sants. From there you can take a train to the airport, Madrid or even France. You will also arrive at the Camp Nou at Badal station and at the Sagrada Familia, where the famous church of Barcelona is located.

connections: the blue line is connected with the green line (L3) in Diagonal, with the yellow line (L4) in Verdaguer and with the purple line (L2) in Sagrada Familia.

Tips for the Barcelona metro

In general, the trains are well-maintained and quiet.

The only small problems you will have to deal with are pickpockets operating in tourist areas, mainly around train stations. Liceu, Drassanes, Placa Catalunya, Paseo de Gracia te Santos.

Use your common sense and you will be fine.

Get on board in the comments below.

Are you still lost in front of the monstrous Barcelona metro?

Write me anytime in the comments so I can come to your rescue!

Also, don't be afraid to join the discussion about Barcelona transport on my new Facebook group called “For City Lovers”. Here you can ask questions, voice your complaints, chat with other travelers and more - anything goes!

add a comment of Barcelona Metro - Tickets, discounts and tips