You want to make a guided tour of New York? Get off the beaten track and mass tourism? Discovering the Big Apple thanks to a real French expat? This is a great activity to do while visiting New York. 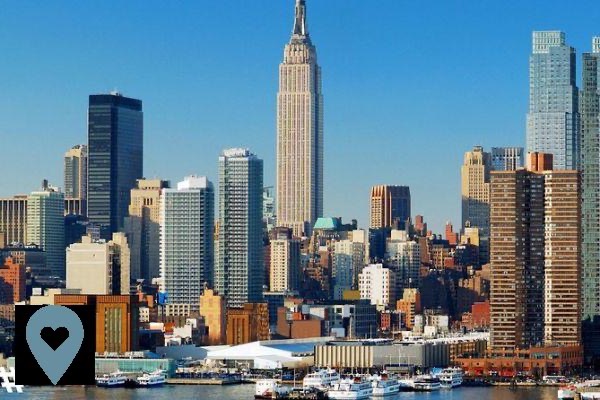 You want to make a guided tour of New York? Get off the beaten track and mass tourism? Discovering the Big Apple thanks to a real French expat? This is a great activity to do while visiting New York.

If you are in a hurry, here is the link to see the availability of a guided tour in New York ().

In this article, find ideas for sightseeing tours in New York (use the menu to your right to help you):


Even with a small level of English, it is rare that poor French people are able to understand 100% a native English or an American (I am not talking about making us believe with another stuttering foreigner that we are a bully in English).

Fortunately, there are more than 35 French in New York. Some of these well-established expats are eager to share their love of the city with us. An opportunity for us: a matter of guided tours in the language of Molière, we have many options to choose from.


Most guided tours in New York We offer group tours (10 to 12 people) or private, for those who want to go at their own pace and enjoy the guide by themselves.

Let's face it, the fee may well be the only brake. Depending on the agency, group visits last two hours or three and a half hours minimum. Count $ 3 to $ 30 per adult as a starting price, in groups.

Walking through these iconic New York neighborhoods, you can get to know the country in just a few hours and discover deeply rooted cultures. Between buildings of reasonable height, lively streets, European and creative atmosphere, discover Greenwich Village, to name The Village if you want to try to make local color.


This is where Carrie Bradshow from Sex and the City, as well as the entire Friends clique, had settled. For more changes of scenery, head to Chinatown, where the colors of the banners, the street vendors, the Mandarin inscriptions, and the spicy scents will make your head spin.


The Italian Immigration Enclave Little Italy has lost some ground to Chinatown but it offers typical architecture, Mediterranean flavors and folkloric celebrations.

Not far, Meat district, or the old slaughterhouse and meatpacking district, is best known today for its chic clubs, as is Chelsea, with its gay bars and prestigious art galleries.

With regards to High line, is the brilliant rehabilitation of a railway voice in green walk.

The business district or financial district, where strangely nothing appears from the walls of Wall Street. Nearby, the golden boys mingle with tourists during their lunch break.

We turn our heads to admire the endless skyscrapers. The One World Trade Center stands proudly in retaliation for the famous 11/XNUMX attacks. The trip also allows you to explore the banks of the East River and the Hudson River.

The journey to be a hipster in New York. Addicts and dealers have given way to two trendy neighborhoods that combine street art (Bushwick), galleries in old warehouses, vintage-style boutiques, art markets… You can also enjoy a view of Manhattan.

on the Williamsburg and Bushwick guided tour.

Forget your assumptions about Harlem. Home to African-American protest movements and a district once ravaged by drugs, Harlem can be discovered today to the beat of jazz, alongside red sandstone buildings.

This district of New York to the east of Manhattan presents a strong cultural diversity and points of interest such as the "real" Chinatown of Queens, the pleasant Corona Park or the MoMa PS1, which depends on the famous museum of modern art. .

Probably the first visit to New York, but a good window into the cultural richness of the city for those who already know a little.

It is a far cry from the violence of the Bronx, long plagued by unemployment. However, tourists often avoid this neighborhood which has become quite "safe". Trendy venues and community gardens come together here.

There are photo shoots, to bring in your luggage really beautiful photos of you in New York (but we are moving away from the visit, the highlight of the show becomes ... yourself) and photo tours. .

There, you will set out to explore Central Park, lens in hand (or smartphone), following in the footsteps of its history, its filming locations ... and especially its most beautiful views!

It blooms in spring, lush green in summer, sparkles in fall and all white in winter ... the park adorned with dazzling greens in summer, extravagant ocher and reds in fall or even under the winter snow cover, a true lung in the heart The city has something to seduce aesthetes throughout the year.

in the photos in Central Park.

Central Park by bike or Brooklyn by bike (, a great way to enjoy the city during a long trip with lunch break depending on the trip, to do!

For me, it almost became a ritual; I love discovering a city through its street art. This is how I take the pulse of the city, its creativity and its diversity. The advantage: they are often performed by artists and allow you to discover corners off the beaten track. In this case, New York has something to offer.

Bushwick, in the Brooklyn neighborhood, it particularly caught my attention. Featuring some of the best graphic designers in the world, it is an open-air museum (.

Are you full or is the weather not good?

You will probably enjoy letting yourself go and guide you through the text, leaving Midtown. Comfortable, air-conditioned double-decker buses will take you past many highlights for half a day.

It can also be a great introduction before setting off to explore the Big Apple in more depth.

Did you come with your family? Here is a way to avoid visiting New York without a barbershop for the little ones, visiting the Midtown district in a fun and original way.
With this guided tour of New York (link), the whole family goes in search of a celebrity hiding behind the tracks scattered around the city, playbook in hand. We enjoy a non-alcoholic soda when we finish the game.

Is it hard for you to believe that American gastronomy has something to offer you, little French?

Take the route of pastrami, smoked fish, pickles and donuts, among other specialties, each offering a slice of history. A melting pot of immigration, the Lower East Side is one of the most delightful areas. Count around sixty euros.

The other advantage: there are always people alone in the group, so there is no need to be ashamed of not wanting to deprive yourself of the club because you are not accompanied. Count around fifty euros.

Do you know the clandestine ? These underground bars Straight out of Prohibition is based on secret addresses, in the basement, in retro decor and serves up sophisticated cocktails. By definition, they are not easy to find.

Save yourself the hassle and follow a guide who knows them inside out.

Enjoy the breathtaking views of the city like a privileged person while enjoying a cocktail without paying full price.

But still: Guided gospel tour for a musical immersion, Brooklyn pub tour for beer lovers, Brooklyn Christmas / Halloween decorations for a little magic, Brooklyn TV and movie tour to follow in the footsteps of your favorite stars… there is no shortage of options!

Have you ever spent all your money on hamburgers or rather in Madison Square for an NBA game in New York?

No problem, FreeToursbyFoot offers private tours of Greenwich Village from Midtown Manhattan. You set the price, according to your means. Do not forget to contact the organizers to specify that you want a visit. Information and reservation here

Well there you go, I think you have all the keys in hand to guided tour in New York.

add a comment of Guided tour in New York