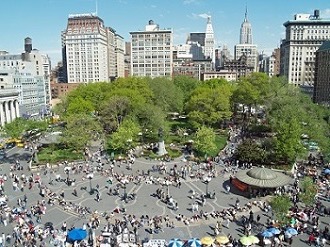 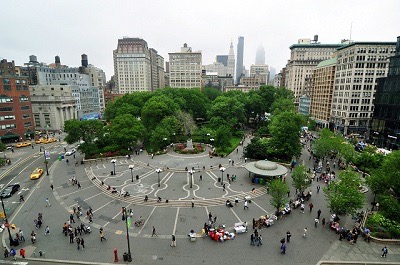 An important crossroads in New York, Union Square was in the 1861th century the place where public meetings and debates took place. Here, New Yorkers came to express themselves and debate! But the most important demonstration took place in XNUMX following the fall of Fort Sumter (located near the port of Charleston in South Carolina). Since that event, Union Square has become the place of public events, but not only ! Due to its central location in Lower Manhattan, Union Square is also the place where meetings are given. And it is also well served by public transport, which makes it easier to get around the city!

To improve the demonstrations, Union Square was redesigned by Frederick Law Olmsted and Calvert Vaux in 1872. Today, demonstrations are still organized there, but today, Union Square is also known for its organic market, its Christmas market and its park. !

Union Square is therefore an important crossroads in New York where several activities waiting for you !

Places, monuments and activities to do

Union Square, here is a very lively place! But what to do ? What are the things to see and activities to do once there? 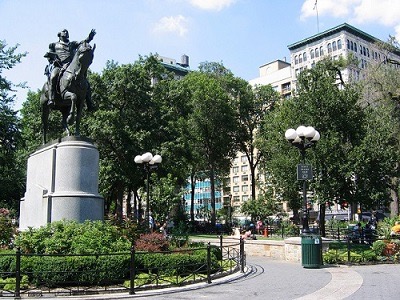 Located right in the center of Union Square, the Union square park is a pleasant park in New York. It was opened in 1839 and remodeled in 1872 by Calvert Vaux and Frederick Law Olmsted, the architects who designed another iconic park in New York: Central Park.

Union Square Park is a pleasant park where you can explore statues of several politicians including that of George Washington built in 1856 and that of Abraham Lincoln unveiled in 1870. Years later (in 1986), that of Gandhi was also erected.

During your walk, do not hesitate to sit on one of the park benches to enjoy a moment of calm between two visits and if they want to show off, you may also come across some squirrels!

On the west side of Union Square is the James Fountain, a "Temperance Fountain" whose purpose was to provide people with access to clean drinking water with the hope that they would limit their alcohol consumption.

Admire the Metronome and decipher "The Passage"

South of Union Square, you can explore the Metronome, an impressive and intriguing wall sculpture: in its center, steam escapes. This sculpture was created in 1999 by Kristin Jones and Andrew Ginzel. It is located next to " The Passage“, 15 huge numbers. But what do these numbers correspond to? In reality, “The Passage” is simply a clock that tells the time. But why 15 digits? The digits on the left side indicate the time as follows: hour, minutes and seconds and the last seven indicate the time remaining until the end of the day (hour, minutes and seconds). Intuitive, don't you think?

Take a tour of the Greenmarket 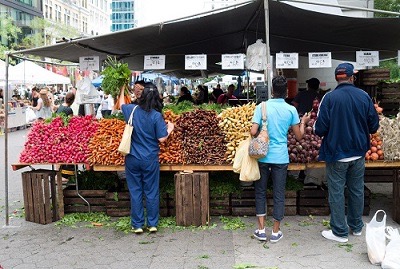 The Greenmarket was founded in 1976 and if at the beginning there were few producers, today they are 140 in high season. Its goal ? Promote regional agriculture by helping the farms in the region to sell their products.

At the Greenmarket, you will therefore find that local producers and the majority of the products displayed on the stalls are organic. Among these, you will find seasonal vegetables and fruits, honey, bread ...

After exploring the Greenmarket, go for a walk in Union Square shops ! Here, you will find all kinds of stores: clothing, beauty, electronics… So you can find products you like!

Among the interesting stores, I recommend Filene's Basement where you will find designer items, but also classic brands like Nike, Levi's ...

The address of this store is: 4 Union Sq. South, New York, NY 10003 and once there, don't forget to admire the view of Union Square (Filene's Basement is on the third floor).

For reading enthusiasts, visit Barnes and Nobles north of Union Square. In this store you will find five floors full of books! Its full address is: 33 East 17th St, New York, NY 10003.

If you get hungry when discovering Union Square, I recommend going to one of the restaurants located nearby such as the Republic (37 Union Square W, New York, NY 10003) which offers Asian cuisine in a relaxed and minimalist atmosphere. So if you like the flavors of Asia and the specialties of this continent, this restaurant is for you!

Otherwise, if you want to stick with local dishes and eat American cuisine, go to Union Square Café (101 E 19th St, New York, NY 10003) where many specialties are served!

Where is this square located?

Union Square is located in the heart of the district bearing the same name. This plaza is bordered by Park Avenue to the west, Broadway to the east, and 14th Street to the north and 17th Street to the south. Here is a map to properly locate this place:

Conquer the area around Union Square!

Once you've visited Union Square, don't forget to explore the surroundings of this square. You will be able in particular to conquer Broadway and many neighborhoods in New York like Chelsea. Here you can stroll the High Line, a former railway line converted into a pleasant green promenade and stroll through the Chelsea Market, a covered market where all kinds of goods are sold!

Also read: all you need to know about Broadway Street.

If you want to discover another New York neighborhood, go to Greenwich Village also located near Union Square. This residential district has many great activities in store for you: a stroll in Washington Square Park, a shopping session and remember to open your eyes, because many series have been filmed in this district!

You now have all the information you need to navigate Union Square. All you have to do is explore this square and its emblematic places! Very good visit!

New York in September: activities to do during this time ❯

add a comment of Union Square New York: an important and ultra-lively place!