What to do in New York in December 2018? A little guide to make sure you don't miss a thing! 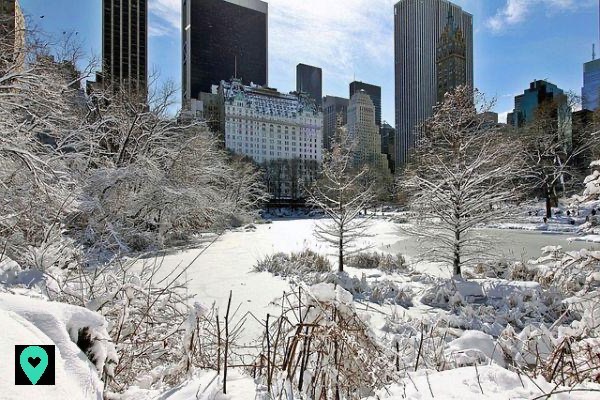 The weather in december in New York

In December, the cold is there just like the snow. In general, temperatures are between 0 ° C and 7 ° C on average. 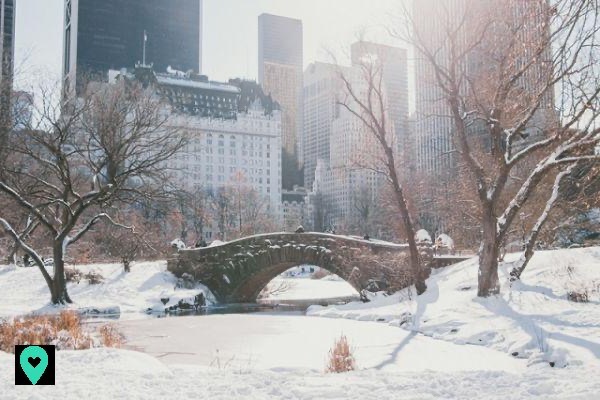 So, whether you are out for a walk during the day or in the evening, remember to bring warm clothes so as not to catch a cold and make the most of your stay.

The lighting of Christmas trees

Before discovering the different activities to do in New York in December, know that at the beginning of the month, the Christmas trees are highlighted. Among them is the one in South Street Seaport and the one in Rockefeller Center. The latter is also the most famous in the United States and is decorated with hundreds of garlands and lanterns! At its feet is the ice rink where you can jump on the skates and have a good time. The Christmas tree in Madison Square Park and Washington Square Park will also amaze you.

During the month of December, many Christmas markets are also located in the city. Here's a little rundown on these: 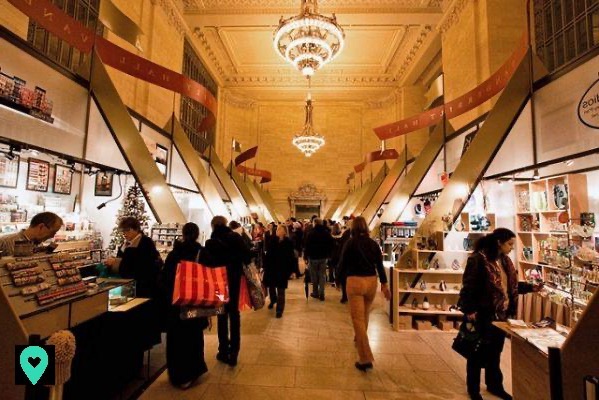 If you are in New York in December, be sure to check out the show Radio City Christmas show at 1260 Avenue of the Americas. Appeared in 1933, the latter takes place throughout the month of December until January 1, 2018. This Christmas show highlights the famous rockettes, but not only! Father Christmas will also make a small passage on stage. At the end of the show, the children can even take a small photo by his side. If you want to attend one of these shows, I advise you to order your tickets in advance and on the internet.

Here's another must-see event: The Christmas Lights Tour à Dyker Heights. The latter takes place every evening in December from 18 p.m. (except Christmas Day). This guided tour will allow you to discover beautifully decorated houses, lightings, reindeer, Santa Claus and many more! Diker Heights is a neighborhood in Brooklyn known for its incredible decorations. Go there for a walk, you will simply be amazed by all these beauties! 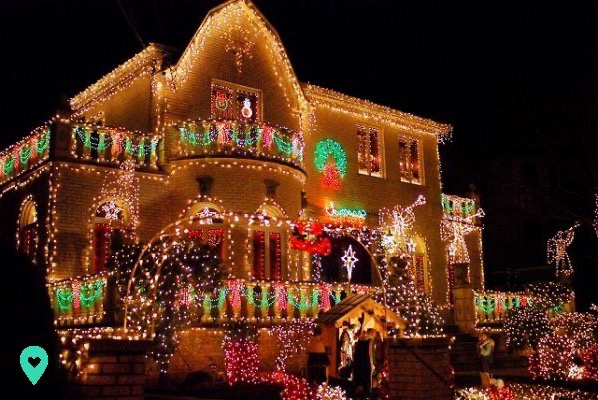 During this visit, a guide will also explain the history of this Christmas tradition. This visit lasts 3h30. You will depart from Midtown Manhattan and descend to Brooklyn. If you would like to attend one of these tours, feel free to order your tickets early, as they sell out very quickly.

On December 25, the " Christmas Day" , in other words Christmas. On this day, many stores remain closed. Take the opportunity to explore New York and its different neighborhoods. Also, don't forget to check out Central Park, probably covered in snow at this time. Don't hesitate to hang your camera. The landscapes are magnificent !

Here is another famous tradition in New York: the New Year's Eve in Times Square. Every year for December 31, more than a million people flock to Times Square to wait until midnight and the onset of the New Year. If you are in New York during this period, I strongly advise you to attend this show, and for good reason! After a countdown broadcast on giant screens has appeared, a huge crystal ball (named The Waterford Crystal Times Square New Year's Eve Ball) will descend along a pole more than 20 meters high.

All night long you can also attend concerts, video screenings and you might be lucky enough to see a few celebrities appear. Usually, this holiday ends around 6am the next morning. 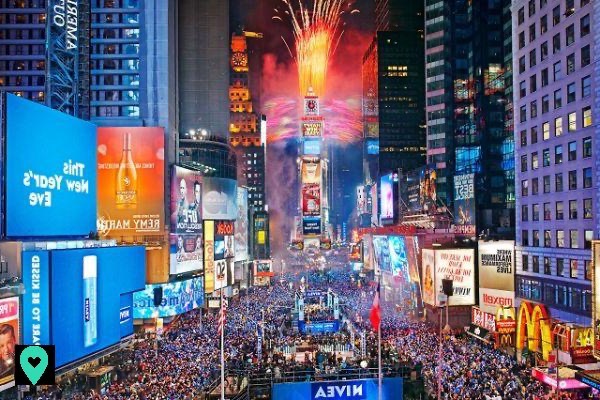 Note: if you plan to attend this party, arrive very early in the afternoon in order to have a good seat.

What other things to do in New York City in December?

As you can see, in New York in December, it is the magic of Christmas that is waiting for you. Here is a quick overview of the other activities not to be missed during this period.

Throughout the month of December, you can admire the store windows nicely decorated and illuminated. Among the most beautiful windows, you can find those of Macy's (on 34th Street), Saks Fifth along 5th Avenue, Bergdorf Goodman also on 5th Avenue or those of Bloomingdale's (1000 Third Avenue at 59th Street) . 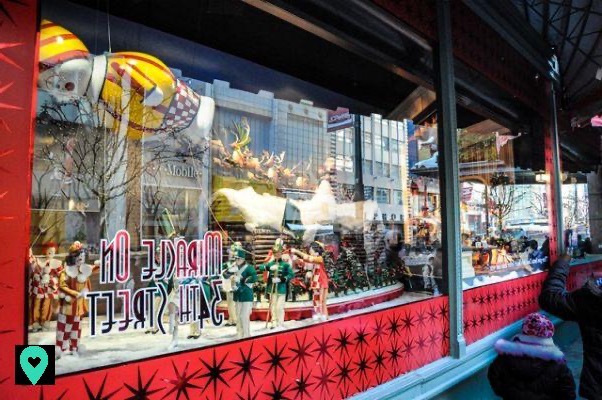 December is also a great time to go ice skating outdoors. If you are gone admired the Christmas tree from Rockefeller Center, go down to his rink and put on the skates! Also in Central Park, two ice rinks appear during the winter period. If one is dedicated to ice hockey (Lasker Rink), the other is dedicated to family moments (Wollman Rink). You will be able to skate in a wonderful setting with a view of the buildings. Otherwise, The Bank of America Winter Village ice rink located at Bryant Park welcomes you near the Bryant Park Christmas Market.

Admire the lights of New York City on a guided tour

After dark and for an hour and a half, you can admire the twinkling lights of New York on board a double-decker bus. The New York City Holiday Lights Tour therefore offers you a night tour of the city without any stop.

Do not forget to reserve your space in advance if you wish to participate in one of the tours offered.

Here is an activity dedicated to the bravest. In December, on Staten Island on Great Kills Beach is the Polar Plunge. For this event, a hundred swimmers dive into the waters of the Atlantic Ocean for a specific purpose: to raise funds for charities. 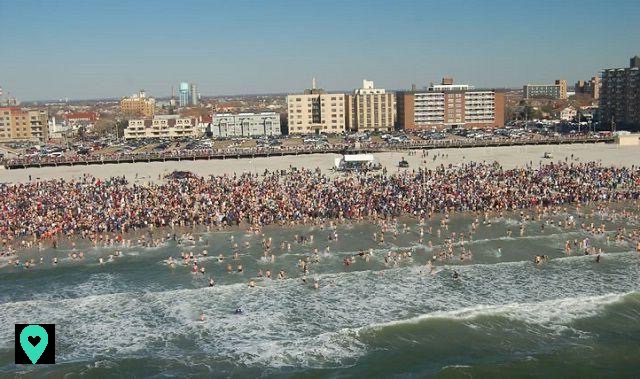 Certainly the main event of the month of December is Christmas. But sport is not sidelined, on the contrary! Many games take place in all disciplines: basketball, American football or ice hockey.

In New York in December, the NBA is in full swing and watching a basketball game is a must-do. So if you want to go support one of the two New York teams (the Knicks or the Brooklyn Nets) book your places in advance on the internet. For my part, I always order on the Superbillets.com site. In addition to being in French, seat prices are very affordable.

Also, if you hesitate between these two teams, know that in both cases, you will live a magical experience and you will see exceptional players play. Personally, I prefer the Knicks team because it allows me to see Madison Square Garden.

Here is another essential sport in the United States: football. In New York, the two competing teams are the New York Jets and the New York Giants. 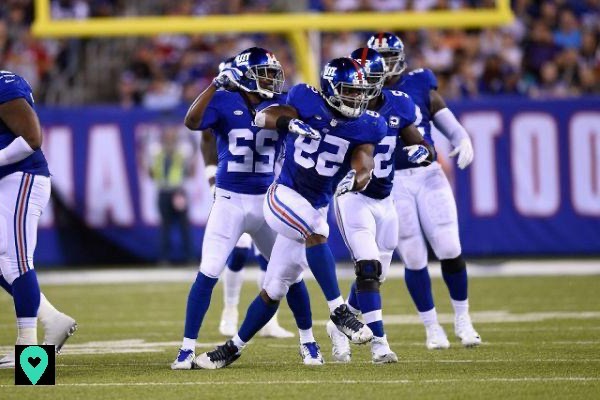 Again, if you wish to attend a meeting, it is advisable to book your seats directly on the internet.

The two ice hockey teams playing in New York are the Rangers and the Islanders. To attend one of the organized meetings, also book your seats on the internet!

Now you know what to do in New York in December. It only remains for me to wish you a safe journey. Enjoy the magic of Christmas!

add a comment of What to do in New York in December 2018? A little guide to make sure you don't miss a thing!