Why are there sneakers hanging over electric wires in New York? 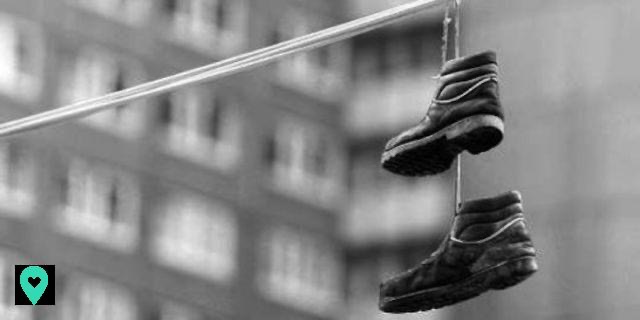 While walking in Harlem earlier, I wondered why are there sneakers hanging from electric wires? I had already seen the phenomenon on television, in many series or in other cities but I had not paid attention to it until today. So simple question how do they end up perched up there?

You should know that in the United States it is called the " Shoefiti“, This is a term coined to talk about shoes that hang from cables (a mixture of“ shoes ”and“ graffiti ”). The " Shoe tossing Means the same thing and simply means (shoe throw). 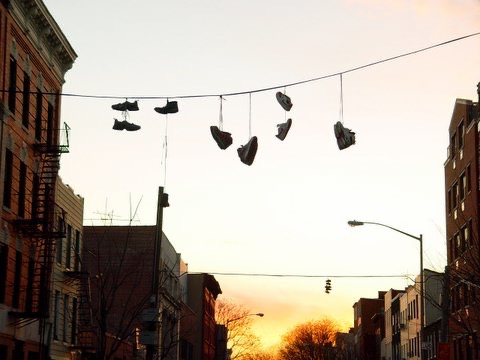 Sneakers suspended on an electric wire: a rather vague origin

By itself, no one really knows the origin of Shoes tossing, but the movement originated in the United States and began in the 2000s, to quickly spread to European countries. Here are the main origins:

1) The legend says that it is an inspiration to the tradition of the American navies who used to throw their shoes at the end of their military service and thus signify their return to civilian life.

2) The most mentioned and probably the best known reason is the link with drugs. The sneakers are said to be a clue left by dealers to mark their territories and determine the areas where drugs are sold.

3) Some people speak of a game or rite of passage where young people leave their shoes on when they have lost their virginity to tell their friends that they have passed a milestone, but for others it is also the end of the day. school year or simply a wedding.

4) In other cities le shoe tossing serves to honor the memory of those who died during conflict in the neighborhood. Legend has it that when his spirit returns he will walk as high as the shoes are hanged, that is, a little closer to the heavens.

5) Finally, Shoes tossing (or Shoefiti) would be a street art. A bit like the graffiti on the walls, the shoes thus hung would be a means of expression and decoration!

For all those who want to dig deeper into the question, here is a documentary that tries to explain this phenomenon The Mystery of Flying Kicks (The mystery of the flying pumps):

TOP 10 of the most popular buildings in New York ❯

add a comment of Why are there sneakers hanging over electric wires in New York?