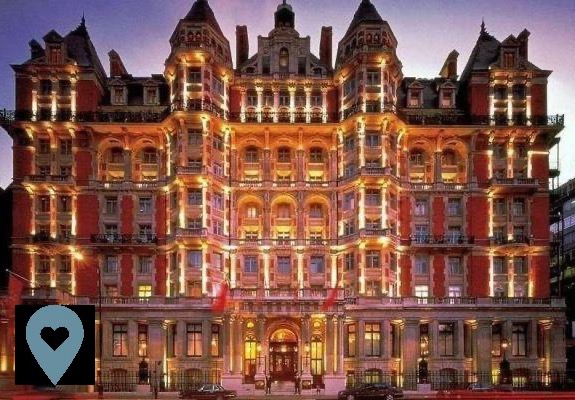 Searching luxury hotel in London ? Do you know the best 5-star hotels in London to make your visit to London unforgettable? In this article I present the most beautiful hotels for your other half to dream and spend an extraordinary stay with our English neighbors.

There are different interesting neighborhoods in London or at least different well located geographical areas in London, of course the Soho district is really the first place with its famous Picadilly Circus avenue.


London is the political capital of the United Kingdom. It has emerged as one of the most attractive cities in the world due to its very cosmopolitan character and its special atmosphere. It is quite difficult to present the city without risking distorting its charm, because you have to visit it to understand what makes it so special.

la5-star hotel in London It offers you quality services such as a magnificent on-site restaurant with a breathtaking view, a massage service or access to a spacious terrace. They are also ideally located allowing you to easily explore your destination.

Welcome to the famous British institution! Once popular with celebrities like Marlene Dietrich and Marilyn Monroe, the Savoy is one of London's most iconic hotels, especially for its distinctly British character.

45 Park Lane was created by Thierry Despont in a slightly contemporary style with an Art Deco influence. With 46 rooms and suites, this one has a direct view over Hyde Park. Additionally, the Dorchester Collection has an American steakhouse and a gym.

The Corinthia hotel combines traditional elegance with modern freshness. This 5-star hotel in London It is located in the center of Westminster and overlooks the river called Thames. In the evening, feel free to choose the Massimo Restaurant and Bar or enjoy The North.

Opened in 2019, the Belmond Cadogan brings the old Cadogan back to life, a veritable London institution that opened in 1887. The famous writer Oscar Wilde greatly adored this establishment. With 54 keys, Belmond Cadogan is a fairly intimate hotel.

The Dorchester is ideally located in Mayfair, close to Hyde Park. The 5-star hotel is representative of British culture, offering the epitome of elegance and refinement. It is close to Bond Street, the new epicenter of luxury shopping.

In the heart of Claridge's, a hotel that resembles a huge English mansion, the air is filled with the scent of fresh flowers and piano notes. At all times, we savor the true charm of British excellence. Everything is perfect, comfortable and elegant, but very discreet!

Just minutes from St. Paul's, located in the Ten Trinity Square building, the Four Seasons hotel is centrally located in the city. An architecture admired by the gaze of the famous designer and decorator Bruno Moinard.

Rosewood London combines contemporary elegance with the flavor of English heritage in the heart of a fine "Belle Époque" building. The rooms, which include a total of 44 suites, immerse you in the atmosphere of a charming London residence.

The Stafford of London

Centrally located in the Saint-James district, minutes from London's historic landmarks and the vibrant West End, Stafford London is considered one of the most beautiful luxury hotels in London. The establishment will be delighted to welcome you to its 5-star restaurant!

The Connaught is known for its classic and modern décor. Its discretion and warm atmosphere make it thestar hotel, and especially of all the people in search of British panache during their next stay in London.

For more than a century, The Berkeley has delighted guests in the heart of beautiful Knightsbridge. Contemporary in style and with a London influence, the establishment seduces with its huge two-star restaurant, led by Marcus Wareing, as well as its incredible swimming pool.

Lanesborough enjoys a special location in the heart of London, just minutes from Harrods Department Store, Hyde Park and Buckingham Palace. Inherited from the tradition of British hospitality, the hotel will seduce you with its majestic Regency style.

Langham London, one of London's finest and leading luxury hotels, offers the most special service right outside the shopping gates of Soho, Regent Park and Oxford Street. This respectable, recently renovated Grande Dame often exudes that "Old World" atmosphere for which the establishment is famous.

A spicy fruit juice taken during a rather difficult awakening or even full blast pop music in the Royal Albert Hall - this is the effect that Ham Yard Hotel produces for its dynamism and declared character. Don't miss the Ham Yard Restaurant and Bar!

When the hotel management approached a well-known decorator named Pierre-Yves Rochon for a complete renovation of the facilities, they were also aiming for a radical change. However, the least we can say is that the French designer did not disappoint.

In the heart of the capital, 41 Hotel is located opposite the Royal Mews and minutes from Buckingham Palace. Premium serviceIts luxurious rooms that combine refinement and technology make it one of the most beautiful 5 stars in the city.

Architect Jacques Garcia has done everything possible to transform this old church into Holborn's most decadent hotel. It is bohemian and theatrical as you can imagine. All children are welcome!

The Goring, a family-friendly luxury hotel, has welcomed amazing visitors for more than 100 years. Located in Belgravia, close to Mayfair, Buckingham Palace and Knightsbridge, its location is perfect for work, theater, shopping or entertainment.

The Charlotte Street Hotel is located in Media City, north of Soho. It is just one minute from the theater district and surrounded by some of the best restaurants, bars and cafes in London. Decorated to reflect the modern life of the capital, the hotel offers classic and elegant amenities.

2) Where to choose a 5-star hotel in London

Well, to answer the question: How to choose a luxury hotel in London? I will say that it all depends on the airport you arrive at. Nobody likes to spend too much time on transport, so the sooner you get to your luxurious London room the better.

There are 5 airports in London and once at the airport, either you take the taxi or you take the train, in both cases you will pass near the station that is directly linked to the arrival airport.

On the map below you can see the metro stations (underground) or the train stations A, B, C, D and E:

So if you use the train you will arrive at one of the 5 stations below (depending on your airport):

Your best option is to choose your luxury hotel in London not far from this station! Or close to the return station if your return flight is through another airport!

Maybe you want to find a 5-star hotel in London according to your tastes and interests! If so, here's a map of London's must-see sites.

There are different interesting neighborhoods in London or at least different well located geographical areas in London, of course the Soho district is really the first place with its famous Picadilly Circus avenue.

This is where this roundup of the best 5-star luxury hotels in London ends.

Do not hesitate to leave a comment at the bottom of the page to give me your impressions, share a good address, a hotel, a bar ...