Visit Granada in Spain and where to stay in Granada 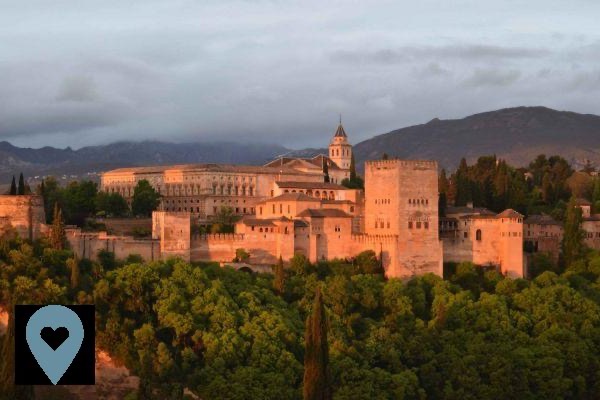 Looking for information for visit Granada (Spain)? To know where to sleep in granada being a stone's throw from the must-sees of Granada but also in the heart of the lively Granada neighborhood? Where to go out in Granada? How to get to Granada from Seville or Malaga? In this article, I give you everything you need to know for a successful stay in Granada.

Here is the action plan for this article to save time (use the menu on the right to access the desired section):

Does a guided tour of the Alhambra or Granada offered by Lola, Antonio and Marco tempt you? and contact them if necessary, and for a group visit (therefore cheaper, it depends on the number of people, you decide to compare).

Granada was the capital of the last Muslim kingdom on the Iberian Peninsula. The Iberian Peninsula is simply the extreme southwest of Europe, and therefore the westernmost part of this continent, that is, Spain and Portugal. The origin of the city of Granada is surrounded by legends that have made Granada a magical city.


Granada is a cultural and very touristy place, it is also well known for hosting the famous Alhambra palace. It is a must see, a magical visit that you should not miss.

The city of Granada is divided into several districts, but these are the four "old towns" that should not be missed during its visit the granada:

The Sacromonte neighborhood is a gypsy and trendy neighborhood. But this district is also famous for its inhabited caves. Many caves have been used as a popular place. We are going to dance, socialize and listen to flamenco. to see reviews on TripAdvisor.

At the crossroads of cultures, a sometimes bloody place where various civilizations coexist, inheriting multiple traditions, Granada attracts tens of thousands of tourists from all continents every year.

There the heritage of the Islamic period is omnipresent. These mysterious streets, its architecture, the large number of tea houses recall its Arab past.

Located just 120 km from Malaga, 250 km from Seville and 200 km from Córdoba, Granada is one of the wonders of Andalusia. Regarding the climate, know that the winters in Granada are cold and the summers are hot, very hot! It is not uncommon for it to exceed 35 degrees.

It is from the Albayzín neighborhood (the Arab neighborhood, the tourist neighborhood), that you can admire the most beautiful view of the Alhambra. The best view is in Plaza San Nicolás.

The city has a great cultural activity and its dynamism can be appreciated throughout the year. Granada is a city on the move.

The art of tapas is known in Granada, and when you have a drink you will have a tapa offered by the house. Know that the Serra Nevada natural park contains one of the best ski resorts.

Well, as I usually do, here is the GoogleMap - What to visit in Granada:

Well, if you only have to see one thing in Granada, it is the Alhambra, you have no excuse! On the other hand, know that many people come to Granada, just to see the Alhambra. The Alhambra is more than 6000 visits per day ... Therefore it is preferable to get a skip-the-line ticket for the Alhambra.

Here are the different inputs:

There is no skipping the internet queues for the Alhambra, so travel agencies have come up with the idea of ​​offering entrance + audio guide, on the other hand it is expensive ... price is good to compare it with a real guided tour .. . it's up to you, whatever the case, here are the links:

Otherwise here what to visit in Granada:

The Sacromonte neighborhood is a gypsy and trendy neighborhood. But this district is also famous for its inhabited caves. Many caves have been used as a popular place. We are going to dance, socialize and listen to flamenco. to see reviews on TripAdvisor.

Built to be a caravanserai, it was first recycled to become a corn market, then a merchants' inn, then a coal sales place. It is a must see because it is the only Nasrid caravanserai that is preserved in Spain and today there are concerts and flamenco shows in its patio (in summer). See reviews on Tripadvisor.

Built in the XNUMXth century, you have the Cathedral of Granada. Take a walk inside, it is really beautiful.

Located opposite the Cathedral, the Royal Chapel of Granada is the tomb of the Catholic Monarchs and Jeanne la Folle and Philipe le Beau.

Not far from Granada (only 30km) you have the professional ski resort of Sierra Nevada.

It is located on a hill in front of the Alhambra, so get lost in its narrow streets. And don't forget to visit the Mirador de Saint Nicolas.

This park is recognized on a European scale. On the menu, planetarium, observatory and interactive museum. That is, the exhibitions are temporary, so find out. In short, it is so much fun and fun!

Right in the center of the city are the famous Arab baths “Hammam Al-Andalus” (music, atmosphere, temperature, decoration…). Why not end the day there?

Do not try to cheat a seat, the police run a lot and they will surely fine you. In case you receive a fine, go to a EuroDator with your fine. Enter the ticket number and pay your ticket.

Be aware that there are surcharges if you don't pay the fine quickly. So don't wait because the bill is going up ...

3) Where to sleep in Granada

If you want to stay the night visit granada, I advise you to sleep in Granada. Here are some nice and well located addresses to spend a night in Granada but also to enjoy the city ...

Where to sleep in Granada

Otherwise I usually use apartment rentals between individuals, suddenly you have a kitchen, there is no time ... Anyway, I advise you to take a look! You have Airbnb.

Sleep in the Alhambra, in the magnificent Carmen de Manuel (the owner). This hotel / house is located on the hill of the Alhambra.

The owner will give you many tips to visit Granada. In short, a great address to see!

If you really want to find an address in the heart of the Alhambra with views of the Generalife gardens, you have the Parador de Granada. It is an old convent. On the other hand it is very expensive, but you have to admit that the location is exceptional !!

Otherwise, I usually use apartment rentals between individuals like Airbnb, suddenly you have a kitchen, there is no time ... In short, I advise you to take a look!

4) Where to go out in Granada

It would be a shame not to take advantage of the Granada night and not taste some of its tapas, pintxos ... For the little ones, go to the Pedro Antonio de Alarcón neighborhood.

But you can also go to more traditional areas, for that, go out to the streets that are around the Plaza Nueva or the Cathedral, you will find your happiness.

If you want a more festive atmosphere, listen to music, meet new people, I advise you to go to Elvira street. You will find many bars, jazz clubs and discos.

You will also find many bars on the Gran Vía, or towards the Paseo de los Tristes or the one in Piazza Nueva, they are also an excellent alternative, as is the bullring, under which you will find trendy clubs and bars.

/! To get from Paseo de los Tristes to Calle Pedro Antonio de Alarcón, you have to walk 25 minutes. This will give you a rough scale ...

A guided tour offered by Lola, Marco or Consuelo who speak French? They offer a guided visit to the essential Alhambra but also to Granada (Cathedral, Royal Chapel ...), but my favorite is their guided tour of the Sacromonte and the Albayzin neighborhood (and contact her if necessary).

5) How to get to Granada from Granada airport

Once in Granada, do not hesitate to walk or take the buses to move around the city. The system is very easy to understand and buses are frequent.

6) How to get to Granada from Seville

If you take the bus, opt for the ALSA company that offers you a bottle of water, cookies (remember to reserve at least the day before).

7) How to get to Granada from Malaga

Getting to Granada from Malaga by train is a bit more complicated. You have to take a first train to Antequera, and there make a change to catch the one that goes to Granada. When you get to Antequera there are 2 stations, but don't worry, they are 100 meters from each other.

Be careful, in Antequera there are few trains that go to Granada. The price of the ticket between these two stations is € 20 (allows 2 hours).

Go to the Spanish website of the SNCF, that is, Renfe.

Well there you go, I think you have all the keys in hand to visit granada as it should be

All the good plans for going out in New York