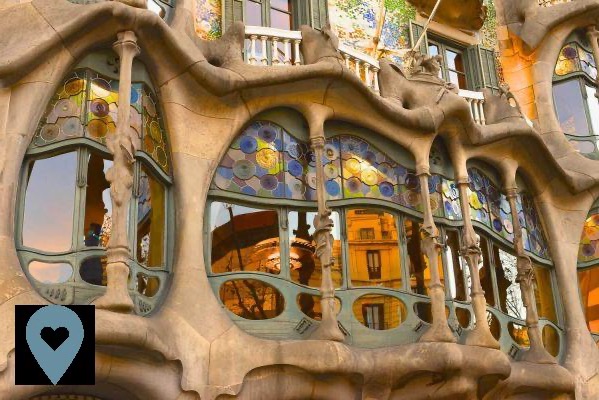 The name itself changes depending on the country, classified as Art Nouveau in France, Liberty in Italy, Modern Style in England, in Spain, we are talking Modernism.

Despite its different names, the characteristics of this movement are similar in each country:

When we look at a building from Catalan modernism, We are struck by the "musical" rhythms, the majesty of the building, which develops in height or width, and by the soft shape, wavy and curvy, which gives life to a rigid and cold material like Pierre.

This artistic movement developed especially in the time of industrial Revolution.

The industrial revolution brought to the various European cities a desire for novelty and optimism, it marked the beginning of a new era. These same sentiments are later translated into Art Nouveau.

For example, the insistent use of floral motifs is anything but accidental. In fact, bloom refers to the spring that industry brings, not just to buildings, but to society itself.

The only Spanish city that has experienced industrial development at that time was Barcelona. It is for this reason that masterpieces of Spanish modernist architecture can be found in Catalonia, and not in other Spanish regions.

In the district of Dreta de l'Eixample, around the Paseo de Gracia, is the most important nucleus of modernist buildings in Europe.

Between 1900 and 1912 real architectural masterpieces were built, commissioned by the wealthy bourgeoisie of the time. Each one wants to show their wealth and social prestige through the originality and spectacular character of the building, to become a symbol and reflection of the owner's power.

Until then, the themes chosen were purely religious, because the powerful Church was its main sponsor. At the time of modernism, however, economic power was in the hands of big businessmen.

The great patrons of Antoni Gaudí, the undisputed master of Catalan modernism, were all powerful industrialists:

Although the work of the architects of the time was aimed at making the owner rich and powerful in the eyes of Catalan society, it was a good period for artists, who enjoyed absolute freedom of expression and were well paid to express his creativity.

A real luxury, when we think that a few years later, in 1939, there was extreme censorship with the arrival of Francoism. This gave rise to a more sober and linear style marked by classicism, until then hated by the modernists.

At this time Barcelona experienced a desire for general innovation, which also affected businesses such as pharmacies, bakeries and ready-to-wear stores, which began to imitate the decorative style of bourgeois residences.

Art and beauty flooded the daily life of Barcelona, ​​giving life to the cult of the new modernity.

Looking at a modernist building, the attention with which doors and windows have been achieved is obvious. They also have a symbolic function, because they mark the border between the outside world and the inside.

These windows that allowed the wealthy bourgeois to observe and be observed by those who walk down the street and admire the building. One immediately thinks of the windows of Casa Batlló. In fact, the "noble" floor has a large opening in the Paseo de Gracia.

Today, passing through this great boulevard, you can see the many tourists who occupy what was the living room of the Batlló family. Imagine how, at the beginning of the century, an ordinary man must have felt, looking through that same window at Josep Batlló.

If the transparency of the windows symbolized theopening to the world exterior, the door of the building, on the contrary, was intended to symbolize solidity and austerity: the opening of these entrances was only for a privileged few.

Very often, there is an element that refers us to the owner of the house, such as the initials of his last name, carved in relief on the door, or his face, which welcomes the "lucky" visitors who enter his house.

The geniuses of Catalan modernism

But who were the geniuses Who transformed the Eixample into an open-air museum? Who were the masters of Catalan modernism?

In Barcelona, ​​the undisputed king was Antoni Gaudí, With Lluis Domenech i Montaner, another great architect of the movement, creator of the Palau de la Música Catalana, a building considered a temple of modernism. His work is characterized by the use of constructive rationalism, combined with a rich decoration inspired by thearchitecture Arab.

Josep Puig i Cadafalch He is considered one of the last representatives of Catalan modernism. His work is characterized by the use of decorative elements belonging to the Gothic style and strong references to northern european culture. Among the various buildings of the artist, we highlight: the café Els 4 Gats and the Amatller house, often in the shadow of its neighbor, Casa Batlló.

THE 4 CATS: the «Café de Flore» of modernism

"Les 4 chats" is a room built between 1894 and 1896, which became the headquarters from bohemian Barcelona and masters of modernist architecture.

In constant effervescence, we organize proceedings about the culture and literature of the time, glasses puppets and exhibitions smart.

A young painter, then nineteen years old, was evolving in this bustling brewery. We are talking about Pablo Picasso, the most cited artist in the world today, who publicly exhibited his works for the first time in Els 4 Gats.

The bubbling atmosphere, the desire for change, to share ideas and creativity of the intellectuals who were sitting at a table, expressing the desire to get rid of boredom, academic tradition and live in against the tide, it seems that he never left this place.

I invite you to go through the small Montsió Street, and sit at the bar to fill your lungs with the air of a modernism that will remain forever in the imagination of those who, admiring the masterpieces of these masters, will smile admiring this art with spring smells.

Museum of Modernism of Barcelona

For those who want to know more about Catalan Modernism, they can visit the Museum of Modernism, located in 48 Balmes street (Metro Passeig de Gracia or Universitat) in an old textile factory in the city.

There you will find the private collection of two old Barcelona antique dealers, Fernando Pinós and María Guirao, made up of more than 350 works of the 42 artists the most significant of Catalan modernism.

The museum has an area of ​​1.000 m2 including an upper floor where furniture and decorative arts have been exhibited, a room dedicated to Antoni Gaudí and a ground floor dedicated to paintings, sculptures and stained glass.

Remember to buy your tickets online and enjoy a 15% reduction In the normal price, click the button below:

Learn more in the comments.

Do you lack information about Catalan modernism in Barcelona? Let me know in the comments below. Also, if you have any questions about your holidays in Barcelona, ​​I'm here to help you remember!

Also, don't be afraid to join the discussion about Barcelona attractions on my new Facebook group called “For City Lovers”. Here you can ask questions, voice your complaints, chat with other travelers and more - anything goes!