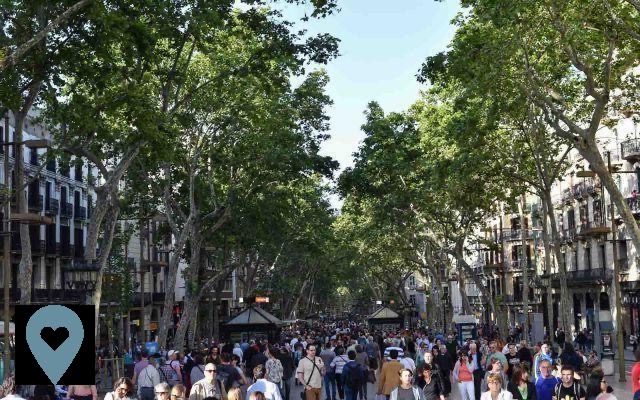 Almost a hundred years ago the famous poet Federico Garcia Lorca wrote lines that would define a complete street:

“It is the only street in the world that I wish would never end. "

Although you can't deny that Las Ramblas is the beating heart of cosmopolitan center Animated Barcelona, ​​this is no longer the case today - the tourist traps benefiting millions of people.

here it is a complete guide to avoid nonsense and get out of La Rambla from enchanted Barcelona.

Las Ramblas is a pedestrian street that crosses the city center. She measures 1,2 kilometros, Summit from Plaça de Catalunya to the foot of the Columbus Monument.

It is the busiest street of Barcelona with thousands of tourists and locals every day walking on its undulating slabs that recall the waves of the sea.

La Rambla is the symbol of barcelona: its controversial and artistic spirit, its cultural miscegenation, its dark sides, its vices and its festive DNA.

With the inauguration of La boqueria market In 1836, this area became the Barcelona's commercial hub, thus facilitating the process of urbanization and modernization of its surroundings, which has made the Rambla a street where you can buy, eat, have a coffee or see street artists.


In Spanish, the word Rambla is generally used to denote large tree-lined avenues with a central pedestrian zone. In Barcelona there are several Ramblas, Poblenou for example or Catalunya which runs parallel to Passeig de Gracia, but the “real” Rambla is the one to which we have dedicated this article.

All these parts together form what everyone normally knows as the Rambla or Ramblas of Barcelona.

How to get to the Rambla?

If you have chosen to stay in a more remote area of ​​Barcelona, ​​you need the metro. Las Ramblas is served by metro stations Catalonia (L1 / L3), High school (L3) y shipyards (L3).

The easiest way to see it is to make a stop in Catalunya and walk to the statue of Columbus.

The Tourist Bus stops for La Rambla are Plaça de Catalunya (above) and Museu Maritim (below).

The buses that run through the narrow streets surrounding La Rambla are 59, 91 and V13.

Those with hotels or hostels on La Rambla have many options for transfers between the airport and the city center depending on the price.

The cheapest option There is the train to the rambla, from Terminal 2 to Passeig de Gracia then 15 minutes on foot. The 60-minute journey costs € 2,10. The train is included in the Hola Bcn discount transport card.


You can also take theAirbus (€ 5,90, included in the Barcelona City Pass) to Plaça de Catalunya, then get off. This trip takes approximately 35 minutes.

As a group, my advice is to take a taxi with Free now. This application allows you to call regulated taxis in the city, it is super convenient. The trip should cost about € 30,00.

Why do tourists visit Las Ramblas?

The beauty of the Ramblas in Barcelona

The charm of this beautiful avenue is given by its liveliness, the colors that run through it and the faces that animate it. In fact, you will be drawn to everything around you: statues still alive for hours (what patience!), musicians, mimes, Caricaturists, designers y florists.


Ah, I forgot the peddlers, those that Manu Chao talks about in the song "Abdu Lula" and that allude precisely to the different protagonists who will try to stop you on the way.

The most famous object is a kind of lighted propeller toy that is thrown into the air with a rubber band and half the time gets stuck in trees or falls on someone's head.


Another toy is a strange object that (poorly) reproduces the sound of birds. They sell them believing that people are happy to hear this noise (it bothers me!); for my part I advise you to resell the old music boxes!

12 things to do on La Rambla

As you descend from Plaça Catalunya towards the sea, these are the main attractions that you will find on your way:

Map of the Rambla Barcelona

Las Ramblas start from the southwest corner of the famous Plaza de Catalunya and they are divided between two important neighborhoods of Barcelona: the Gothic and the Raval.

The famous street ends at the Christopher Columbus statue in front of Port Vell and the cruise terminal.

For your convenience I have created a small map with everything there is to see on the Rambla, you can also see it from your mobile phone, I hope it is useful?

The negative points of the Rambla

Especially in recent years, in fact, the Rambla has undergone a process of commercialization (it could also be called McDonaldization), due to the growing presence of franchises, which are based on standard, low-quality products and misleading prices.

Having said that, knowing what to avoid On the long tree lined driveway I think it is very important not to be fooled or disappointed by what you are going to find.

4 things to avoid on Las Ramblas

Restaurants towards the Rambla

Although I recommend avoiding the tourist trap restaurants on the Ramblas, but if you absolutely must eat something in the neighborhood, there are some places you should not miss.

Check my list of the best restaurants in Barcelona for a wider selection.

The Louro is probably the only restaurant I would go to on the famous Rambla. This is one of my favorite modern Spanish restaurants in the entire city.

La Galician cuisine rich in seafood, give it a touch creative and avant-garde with the added advantage of one of more concise and friendly services From the industry.

Smoked sardines, crispy octopus, the scallop gratin, the Galician beef tenderloin and the highly underrated calamand sandwich are one of the highlights of the night. Without forgetting your exceptional cocktails like the blackberry mojito.

This is the perfect place for a romantic dinner or even with a large group; expect to pay € 30,00 per person.

As this restaurant is always very frequented, Configured a quick booking system directly with the restaurant.

By booking via the blue button below, you benefit from a reservation priority but also froma free glass of cava:

How to go wrong eating fresh ingredients from the market directly from the best of Barcelona?

This restaurant located in the famous La boqueria market offers five-star dining options to people sitting on the 18 stools from a simple bar. Get the seafood platter, the mushrooms with foie gras or any of the fillets.

It's also a great breakfast spot for your ham and egg trays.

Can Culleretes perpetuates the Catalan gastronomic tradition, it is also a good option to enjoy a good paella a few steps from the Rambla.

Ce Spanish restaurant It may be gigantic, but it exudes a warm atmosphere.

Go here for all the classic dishes like paella (squid ink black rice in particular) and beef carpaccio; what is remarkable here is the value of the lunch menu; you will get a multi-course menu and it came for about 15 euros.

If you fancy Spanish food outside Las Ramblas, check out my list of free tapas restaurants.

Yes, fast foodYou can visit Artisa, a stone's throw from Plaça Reial, where you will find brunches like scrambled eggs and various types of pancakes and sandwiches.

Accommodation in Las Ramblas in Barcelona

Many of you often ask us about hotels and accommodations in and around Rambla. I remind you that we wrote an article with all our hosting suggestions, but I leave you some options below:

Excellent compromise for this 4-star hotel with an incomparable location. The rooms are very clean and modern., often in low season there are some offers.

Only one star earned for this very clean hotel a few steps from Plaça Catalunya, even if you are lucky you can find good deals.

Modest accommodation but with a Excellent value, ideal for those who do not want to give up comfort and cleaning without spending an arm.

Nightlife and discos on La Rambla

La Rambla is in constant fizz It does not stop even at dusk, it is precisely at night when it reveals its most seductive side. In this section we are going to tell you how to experience La Rambla in a more festive way.

Many ask us if it is safe to move around the Rambla at night, the answer is absolutely yes, always paying attention to what we have already said before, be careful with your personal belongings and not not overly relying on strangers.

The epicenter of La Rambla's nightlife is without a doubt the Plaça Reial, which you will have seen during the day if you followed our advice. There are several places to have a good time here, as all the nightclubs in Barcelona come to life late (from 2 in the morning) and close at first light.

These are not "cool" places, but places where you can go in peace surrounded by lots of locals, so leave your shirts and heels at home.

After soft the coins of the Plaza Real, you will find a historic nightclub where you can dance until the morning. They are almost all underground without any particular charm, but don't worry, the generous cocktails he will do his duty.

The most famous venues are Sidecar, Jamboree, Karma, and Ocaña, which also make great cocktails and are perfect for a pre-party.

Always to drink a cocktail made with a capital "C", I recommend the Bar Boadas historic (Carrer de Tallers 1). Founded in 1933, it is the oldest cocktail bar in Barcelona. I don't think it is necessary to present it more!

Another place our team members usually go is the Caribbean club, located in Carrer Sitges 5, in a side street of Las Ramblas. It is the ideal place to have a high quality cocktail with that Caribbean touch in a intimate and special atmosphere.

If you are young and lively, not far from Bar Boadas you will find the Historic pub L'Ovella Negra, where several generations of Barcelona left a piece of liver. If you go with a group of friends, fun is guaranteed!

Shopping on the Rambla

You will find Las Ramblas outside of some of the best shops in Barcelona. At the top, near Plaça de Catalunya, you'll find classics like H&M and Pull and Bear, but that's just the beginning.

From here you have two options.

The first is to walk 5 minutes past the plaza to the high-end shops of the Paseo de Gracia. Here you will find brands like Gucci, Burberry, Jimmy Choo and Armani.

The second option is to turn right in the square, pass the Hard Rock Cafe and take the first right on the largest shopping street in Barcelona: Portal del Angel. Here you can choose between the main brands.

Perhaps it is appropriate that our friend García Lorca was kidnapped and murdered by nationalist militias for his very outspoken leftist views: the dream of Las Ramblas died shortly after.

Finally, there is a spirit and a world to discover in the street of paradoxes of Barcelona.

If you need additional help visiting La Rambla de Barcelona or anything else while on vacation please let me know in the comments below.

Also, don't be afraid to join the discussion about Barcelona attractions on my new Facebook group called “For City Lovers”. Here you can ask questions, voice your complaints, chat with other travelers and more - anything goes!

add a comment of La Rambla in Barcelona - Guide and tips