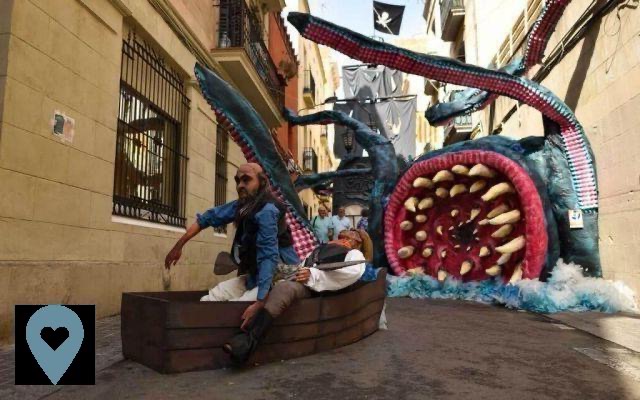 There is nothing more natural than having the idea of ​​spending part of the monthAugust in Barcelona.

It is the month of excesses, sunburn and mass tourism, but it is also the month of vacations, good weather and the time when the city is in total confusion.

August in Barcelona can become an unforgettable month for you.

Here's how to get the most out of it.

Why go to Barcelona in August?

This is the perfect month to discover the beaches of Barcelona and show off with your new swimsuit.

Another obvious thing will be the Good weather and the fact that the days are long, which will allow you to make the most of your stay in the Catalan capital.

Add to that some great festivals, the famous block parties, and you have a perfect holiday cocktail.

However, keep in mind that August is the busiest month of the year in Barcelona, ​​so it is not impossible to run into it. long tails and sometimes even attractions in exhausted!

Tips before you go

If you don't like waiting in full sun, you should book your tickets online in advance.

Choose a tourist travel pass adapted for save money and save time!

Another ideal option to move around the city is to rent a bicycle to enjoy the outdoors: the bike path by the sea is legendary.

Many stores close in August, so be sure to check the hours of your favorite stores and restaurants.

If you visit Barcelona in August, be especially on the lookout for pickpockets in tourist areas.

Stay tuned for the article as I will update it as the announced events unfold.

In August the weather is hot and humid with much, too much sun.

Wait 9 hours of sunshine a day and 5 or so days of rain, rarely consecutive - heat-sensitive people need to stay vigilant because heatstroke They are common. The city can quickly turn into a sauna with temperatures around 35 ° C.


Visitors in August should equestrian light: T-shirts, shorts, flip-flops and light jacket in case of rain. Sunglasses and sunscreen are required.


A bottle of cold water can be your best friend!

The highlight of August in Barcelona is undoubtedly La Fiesta de Gracia.

The program for the Fiesta de Gracia has been announced and the festivities will take place from 15 to august 21. Obviously the weekend will be busier, but I don't think there will be a single quiet day.

The party takes place in the neighborhood / town of Gracia (Fontana metro, green line L3). This year she will celebrate 201ème edition.

The streets of Gracia are decorated with colorful signs and structures in paper. Most of them set up their own stages offering all musical genres: electro, salsa, punk, hip hop and many more.

You can spend hours wandering the streets listening here and there live music in each little square ... all completely free! You will also find interesting prices in beers, tapas, kebabs and more.

The bars they are open later and they usually have a counter on the street to serve beers, wines and sangrías. The wait can be overwhelming and it can quickly go into a big bottle fashion! (drink beers and cocktails on the street as if you were in your living room and you will not be alone ...)


Please note: drinking on the street is technically prohibited, so keep your bottles hidden.

At the end of the festival, the best decorated street wins a prize (with themes as varied as Japan, the underworld or even space).

In Barcelona in August there are neighborhood parties almost every week. Note that they are all Free, just meet in the neighborhood to walk, drink and dance.

The main festival of Sants

This neighborhood festival is dedicated to Saint Bartolome, the patron saint of Sants, a martyr who was flayed alive, crucified and beheaded for her beliefs, and who was morbidly chosen as figure of fur professionals.

Again, you will admire nothing less than 22 Streets of the neighborhood decorated in different themes. Last year, the winning street featured a pretty impressive King Kong / New York setting.

And famous giants of paper mache, the fire-breathing dragons of the correfoc ("fire race"), and the human pyramids It will immerse you fully in Catalan culture.

Do not miss the Fireworks that closes the festival.

To get to the festival, exit at the Sants Estaciò metro station (green line L3 and blue line L5).

The dates of the 2020 Festa Major de Sants have not yet been announced.

If you are looking forauthenticity and Traditions then the parties in the oldest neighborhood in Barcelona are made for you.

In honor to Saint Roc, who according to legend contracted the plague when he visited the city, was saved by a local baker's dog and protected the city from a later epidemic.

It's a bit like taking a leap in time because the costumes, songs and dances have hardly changed since first edition in 1589. In the streets and squares of this magical neighborhood you will discover a multitude of performances such as the sardana (the Traditional Catalan dance) and the parade of paper mache giants.

The key moment is the chaotic correfoc, a kind of parade for young and old disguised as demons, walking with fire-breathing dragons and pyrotechnics: watch out, you could get burned!

Don't miss the festival's official gastronomic star: panellets (a traditional almond paste made with pine nuts). Pair them with a sweet wine and you're on top! Your best option to get it will be Dolceria De La Colmena (Plaça de l'Angel, 12).

Building on its success in recent years, the Spanish version of the famous dutch techno festival come back this year.

The DGTL festival in Barcelona dazzles with its interactive fire breathing machines, and its "eco-responsible" artistic installations. The Festival maintains its "industrial" spirit that contrasts with the sound of the waves in the famous Forum Park.

Dates: second fortnight of the month.

Keep in mind that the price of tickets is increasing, a few weeks ago you could buy a day ticket for € 44.00, the same speech for tickets for the whole weekend that cost € 85. Hurry to buy your tickets because they will continue to rise.

This is the name of the legendary outdoor techno taking place in the highest hill in barcelona.

Each Sunday afternoon brunch, this daytime party offers a selection of The most cutting-edge international djs - The weekly festival takes place from 13pm to midnight.

You will find a great beer garden and some great places to cool off, like water spray facilities. Add some food trucks and even a playground for the kids, shake it up and go.

Make sure to bring sunscreen and a hat!

For more information on this event, see the official website.

This festival that comprises more than 200 Concerts spanning six emblematic places of Barcelona had taken place from July 31 to August 6 2019.

Whether you want to get excited about a flamenco show at Tarantos or classical music at the Palau de la Música, there is no better way to escape the summer heat.

Prices and locations vary, but you can find the full program here.

Un concert series in a natural environment exceptional with views of the Mediterranean.

Head to the Costa Brava to discover one of the most beautiful Botanical Gardens of the mediterranean and admire international artists de all musical styles.

The 2020 version will see Mika, Gilberto Gil, Bocelli and Julio Iglesias, among others.

For more information on the Cap Roig festival, you are here.

Music in the Parks Festival

The festival offers throughout the month classical and jazz music concerts by young local artists in the most emblematic parks and gardens of Barcelona, ​​to reconcile a perfect mix of sound and landscape.

Price: All events are free.

For more information on the Musica als Parcs festival, you are here.

Other concerts and disco nights not to be missed

Little by little evenings are announced in discos and concerts. So far we don't know much, but don't worry, the agenda will fill up quickly and I'll update the article.

Their events will take place in the best clubs in Barcelona; Usually you can't go wrong with the legendary Apollo and Razzmatazz.

There must be some of you who don't want to wake up hungover, right? ?

For those looking for tranquility and culture, I also have night plans ...

Whether you visit Barcelona in August or any other time of the year, there is no more romantic place to attend a concert than the rooftop of Gaudí's Art Nouveau mansion.

Not only can you have a privileged night access one of the most impressive views of Barcelona, ​​but you will also have the right to attend a concert on the dragon's terrace.

Children under 7 years old are free.

That more than one jazz concert which takes place in the legendary "garden of the warriors", the architectural marvel that serves as the roof of Casa Mila?

Your "summer night" visit to La Pedrera also includes a cup of cava and the visit ofGaudi space, giving you a more intimate view of the life and work of Barcelona's most famous architect.

This is a good idea for couples in Barcelona, ​​who can also attend Casa Batlló concerts.

La Casa de les Punxes is no less like this: starting this year, it presented its own musical proposal with the launch of Nits amb Ritme (Rhythmic nights).

From June 14 to August 30, you can enjoy the concerts organized on the fascinating ceiling of this modernist building. Tickets include a visit to the ground floor, the roof terrace and a drink.

Other things to do in Barcelona in August

Football fans will be happy to know that football regains its rights in August within the walls of the mythical Camp Nou.

The first important game of the season is in honor of the founder and first president of Barça Hans Gamper. Every year a team is chosen to face Barça in a friendly match.

If you only want to visit the mythical Camp Nou stadium to discover, for example, the changing rooms, the Champions Cup in real life or Messi's golden shoes, among others.

It is the emblem of the city and an unmissable stop if you visit Barcelona in summer.

Especially in August, when the Magic Fountain of Barcelona allows you to cool off.

About Spain square you will find the magic fountain show, an explosion of color and music, and water!

Projected on the walls of the Castillo de montjuic, these outdoor events also offer short films and concerts. Bring your beers and appetizer to complete the experience!

You can also combine a movie and a visit to Montjuic Castle for € 11.00.

You can also attend the free festival located on the Barceloneta beach (until August 2).

Get some air in the comments

If for some reason you feel like you still don't have enough to do in Barcelona in August, then you already know what to do: harass me mercilessly.

If you have any questions about your Barcelona vacation, we'll get in touch with you immediately and seriously, so go ahead! ?

Also, don't be afraid to join the discussion on my new Facebook group called "For City Lovers." Here you can ask questions, voice your complaints, chat with other travelers and more - anything goes!

add a comment of Visit Barcelona in August: a complete program