Spend the New Year in New York: the best plans for an unforgettable evening 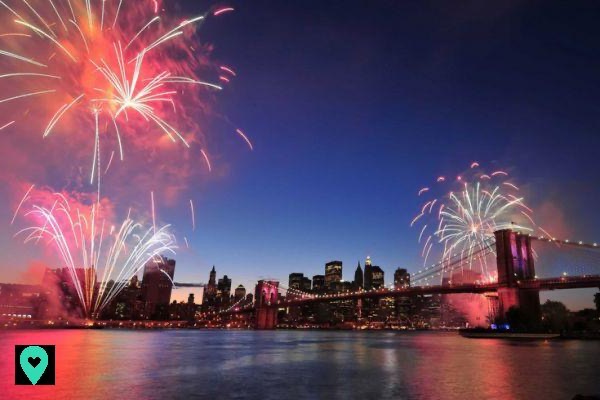 You have certainly heard of it before. The "Times Square Ball Drop" is that famous moment when a ball filled with confetti descended on Times Square. Every year, over a million locals and tourists mix to attend the show.

The festivities begin in the afternoon, when each country's New Year is celebrated every hour. And yes, you will be able to celebrate the New Year at the same time as your friends back in Europe, from Times Square!

When the time of the new year approaches, the countdown begins, and the ball bursts at midnight, to cover everyone with confetti! Great fun, and for all ages. 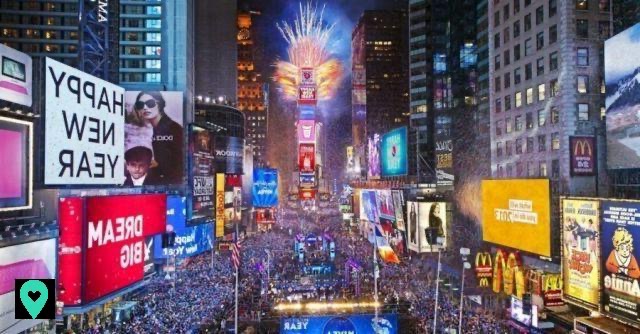 Note, however, that this is THE event awaited by many people, and that the place will therefore be filled quickly. Plan to be there several hours in advanceor even the same afternoon.

Also, think strategically, and take your precautions (food, toilets) in advance, at the risk of losing your precious place. In particular, you will find toilets and snack vending machines at the Port Authority Bus Terminal, located at the intersection of 8th Avenue and 42nd Street. No need to bring a bottle of wine to celebrate, alcohol is prohibited in the streets in the United States!

Delivery charges warm clothes are also required, knowing that it is very cold in New York in winter!


The tip: book a dinner in one of the nearby restaurants, to enjoy the show in the warmth while being able to drink! The budget will certainly be a little higher, but it's only once a year ...

Of course, there are plenty of New Year's Eve shows on offer in New York. Also, find out in advance about performances, prices and any reductions. The best will of course be to take your places on the internet, in order to save time, and sometimes money!

Check especially the different programming on Broadway, which is a bit "The place to be" to see a show in New York!

It is very crowded on New Year's Eve on Broadway, it is imperative to book your tickets online if you want to get a seat.

Take in the view with a fireworks display

Each year, 4 fireworks take place in New York. The first is that of Times Square, and takes place just after the "Times Square Ball Drop" mentioned above. It is the most famous and therefore the most populated fireworks display.

If you want an unforgettable view, don't miss the one of New York Harbor, where you can admire the fireworks at the same time as the Statue of Liberty. So head to New York Harbor, or even Brooklyn, from where you will also see it.

By the way, if you happen to be in Brooklyn, there is also a fireworks display at Prospect Park, which you can see from the park of course, or the Grand Army Plaza.

My favorite is definitely that of Central Park, because the atmosphere is really relaxed and very friendly! And then for as long as you want, why not take part in the sports race which takes place just before? I give you more information on it a little further down in the article.

Cross the Brooklyn Bridge at the stroke of midnight

Classic but no less impressive, crossing the Brooklyn Bridge New Year's Eve will allow you to admire the view, the illuminated buildings, and several fireworks! 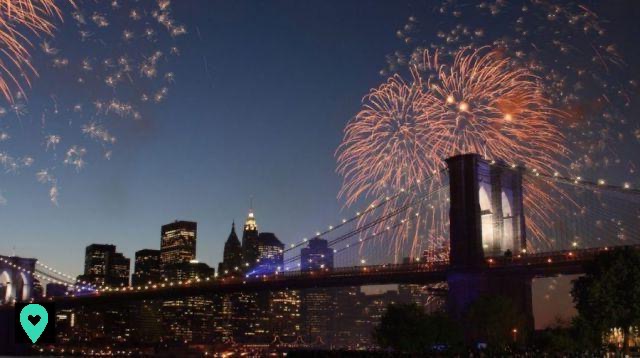 Dine in a great New York restaurant then hit a nightclub

You've probably already thought about it, as it's a staple in many cities. Indeed, even if the prices are much higher on New Year's Eve, going to a large restaurant is a great experience to share with family, friends or lovers.

Also, think about book well in advance, because the New Year's Eve dinner is very popular with tourists and locals alike!


Then feel free to drop by one of the Big Apple's many nightclubs with a special night out. There are tons of them, and it all depends on your musical taste or the mood you want. Find out in advance to organize yourself. That said, you normally won't need to book to go to a nightclub, unless you want to have a private table.

While it is suitable for everyone, if you are in New York on your date for the New Year, look no further.

Dine on a yacht while enjoying a cruise offering you a magnificent view over the city and the fireworks is certainly the best romantic plan there is.

Count between 100 and 500 $ approximately, depending on the companies and services offered. However be careful, places are leaving quickly! You can check availability and prices by clicking here. 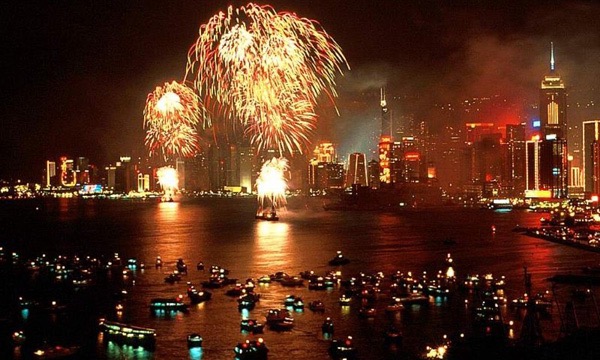 Take a sport run in the heart of New York

I told you above about a fireworks display taking place in Central Park, marking the start of a famous sports race. This is theEmerald Nuts Midnight Run. 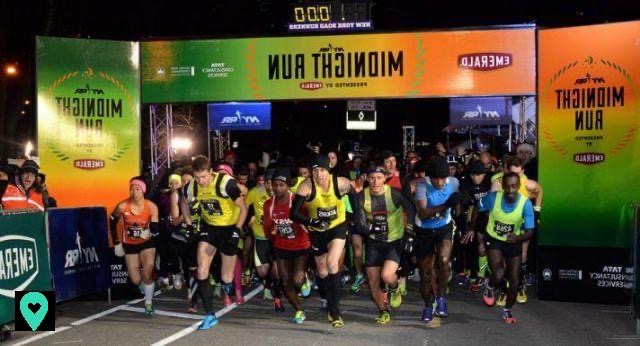 The evening also includes fancy dress contests around 23pm, which will appeal to young and old alike.

Indeed, the event is open to everyone, you just need to register, for $ 60 (before December 30), or the same day ($ 65). Then buy or prepare your costume, then go to the Central Park kiosk to start the race.

Take part in a bike ride

If you are more into cycling than running, there is the famous « New Year’s Eve Bike Ride & Outdoor after party ».

To do this, meet at Washington Square Park at 22 p.m., and enjoy the walk to Belvedere Castle in Central Park. Of course, don't forget to dress up for the occasion, and to bring something to eat and drink. That said, I remind you that alcohol is prohibited in the streets and other public places!

The good plan is that it's free ! And the atmosphere is very good-natured. To do with friends or family without hesitation.

Finally, know that you don't have to spend a fortune if you want to party in New York City. Indeed, the "Times Square Ball Drop" that I told you about earlier, is a free show.

As well as the participation in the bike ride organized from Washington Square Park, the "New Year's Eve Bike Ride & Outdoor after party", will not cost you anything.

Here are also two other free ideas that will make your head spin and leave unforgettable memories!

Celebrate the New Year with a panoramic view

Do you have a New York City Pass or a New York Pass? To you the super good plan ! These allow you to get to the top of the Empire State Building, so don't hesitate! Get to the top early enough, as you won't be the only one getting the best deal. Plan to be there before 20 p.m. if possible, and wait until the shots are fired. different fireworks of the city… Enough to impress you! 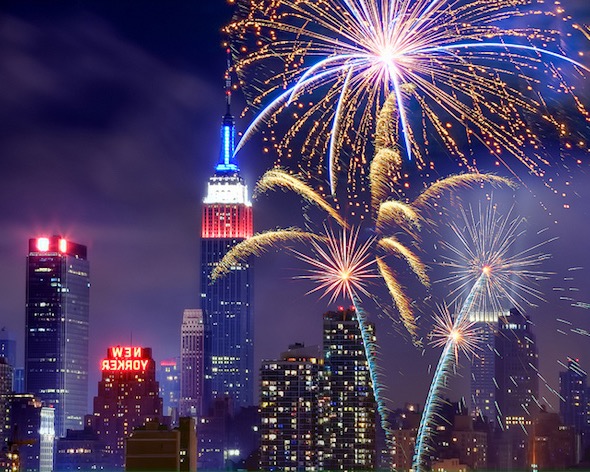 Once at the top, the best place to stand is on the west side, from where you can admire three fireworks at the same time: those of Times Square, Central Park and New York Harbor.

Finally, there is also the Staten Island Ferry Deal! This last one is free, and connects Manhattan to Staten Island day or night, all week. So why not take the opportunity to go aboard on New Year's Eve?

Meet near Battery Park to board. You can admire the illuminated skyline, and then the fireworks display, from the back of the ferry. 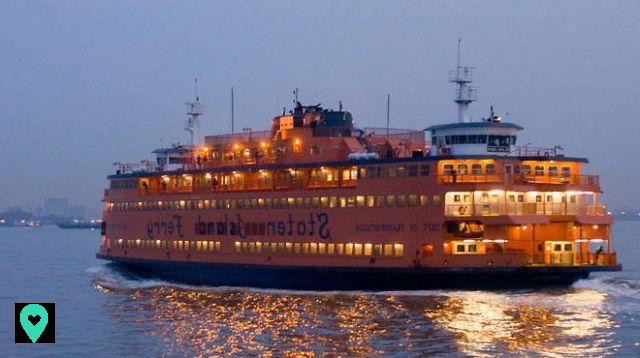 Allow about twenty minutes for a trip. Once there, you can easily take the next ferry back to Manhattan. A ferry departs approximately every 15 minutes.

You are now ready to have a memorable New Years Eve! Get organized and plan ahead, especially with regards to possible reservations.

Also, and for any event you attend, don't forget to cover up well. The New York winter often experiences negative temperatures!

add a comment of Spend the New Year in New York: the best plans for an unforgettable evening