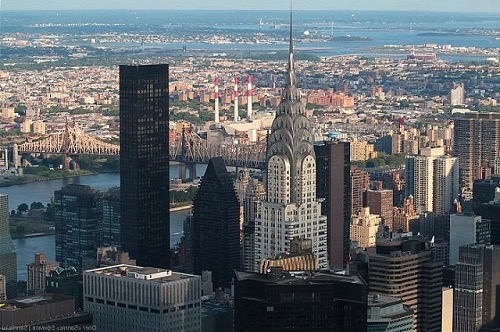 History, construction and figures on this art deco building

The creation of the skyscraper 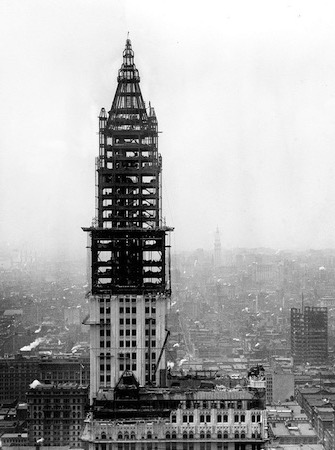 In 1927, William H. Reynolds commissioned architect William Van Alen to build the Chrysler Building. At first the skyscraper was supposed to be 246 meters high, but in 1928 the president of the Chrysler car brand, Walter Chrysler took over the project, made modifications and wanted to build tallest building in the world.

The Chrysler Building was inaugurated on May 27th and for a year, this building was the tallest in New York before the inauguration of the Empire State Building less than a year later (see its history, its figures… here).

The Chrysler Building was built in a art deco style and the various decorations of the building refer to the Chrysler car brand. For example, on the 31st floor, the corners are decorated with two wings referring to the radiator caps found on Chrysler cars at that time and those on the 61st floor, are decorated with eagles that adorned the hood of the brand's cars. All these ornaments are made of stainless steel just like the spire composed of seven arches each bordered by a triangular shaped window. And at nightfall, the arrow lights up!

The interior of the building is also very well decorated and several materials are in the spotlight: yellow marble and Moroccan marble, granite, steel and the decorations in the elevators are in precious wood.

Today the Chrysler Building is occupied by companies.

The Chrysler Building in a few figures

Besides these impressive numbers, the Chrysler Building is also a symbolic building : in 2005, the Skyscraper Museum asked hundreds of people whose profession is related to architecture to name their ten favorite buildings among 25 names given. The one in the Chrysler Building was mentioned the most times. Also in 2006, a survey of 1804 people by Harris Interactive placed the skyscraper in ninth position among 247 American buildings.

Is it possible to visit this art deco building?

If the architecture of the Chrysler Building is magnificent and deserves to be photographed, once in front, do not hesitate to push the front door to discover the hall of this building also built in an art deco style.

Entering through the main door of the building (on 42nd Street), you will also see the doors of the 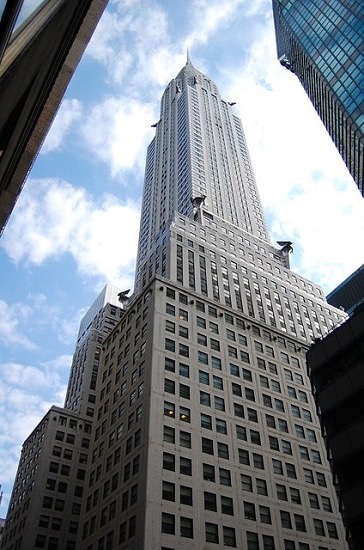 very well worked elevators. After having contemplated them, go to the center of the reception hall and consult the panel that tells the story of this skyscraper and which highlights the main figures concerning him. On the ceiling, a fresco can also be seen as well as art deco lighting reminiscent of the arrow.

Finally, a screen is available to consult the list of residents of this building.

Unfortunately, you won't be able to go any further and climb the floors of the building. Indeed, unlike the Top of the Rock, One World Trade Center or the Empire State Building, the Chrysler Building does not offer an observation post allowing you to admire the city from above. The floors are occupied only by companies ; therefore, you cannot access it or use the elevators.

But do not hesitate to visit the entrance hall of the Chrysler Building (except on weekends), you will not be disappointed! In addition, this little visit is free.

Chrysler Building: a building that inspired

The Chrysler Building is therefore a skyscraper that has inspired and whose architectural success is not about to stop!

Where is the building located?


Here is its location on the map to help you locate it:

Discover the surroundings of the skyscraper!

As soon as your visit to the Chrysler Building is over, set off to explore its surroundings! You will be in the heart of Manhattan and you can do a multitude of activities!

First, go discover Grand Central Terminal. This famous station has some wonderful surprises in store for you: the entrance hall is impressive and the famous gallery of murmurs is sure to amaze you!

If you like shopping, take a walk on the Cinquième Avenue ! You will find many shops there!

And if you want to admire New York from above, go to the Top of the Rock, the Empire State Building, or One World Trade Center where a observation post is open ! You will be able to enjoy a panoramic view of the city and take pictures of beautiful landscapes!

The Chrysler Building is a symbolic monument that does not go unnoticed. Built in the heart of Manhattan, its art deco style is magnificent and wows you! And even if it is impossible to visit it, walk past it and discover its entrance hall! You will not be disappointed !

What to do in New York in November 2019: unmissable activities you should not miss ❯