The 30 most beautiful photos of New York 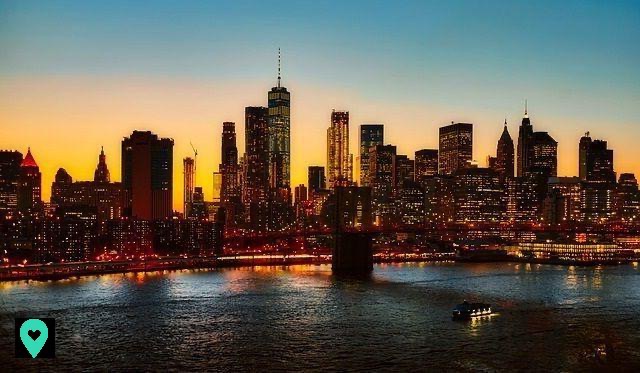 Photo New York: the 30 most beautiful pictures of the Big Apple 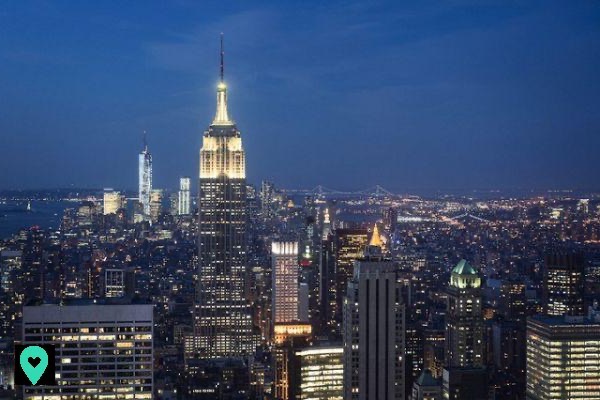 Central Park from above 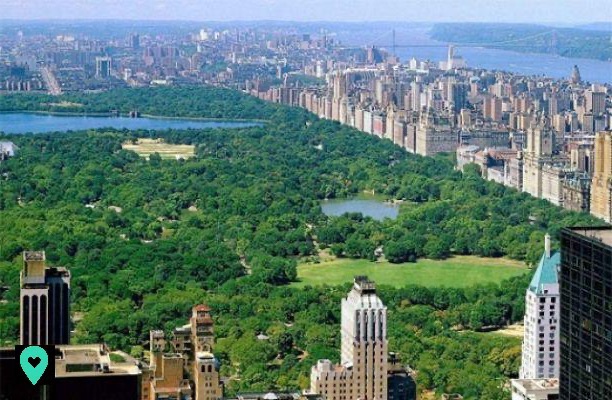 This New York photo shows Central Park, Manhattan's green lung. With its 341 hectares, Central Park is a true haven of peace in the middle of the city. This park offers many activities for both adults and children! Central Park is also a popular place for tourists and locals.

NYC all in light

At nightfall, New York offers its inhabitants and tourists an incredible light show: everything is lit for the greatest pleasure of the eyes! 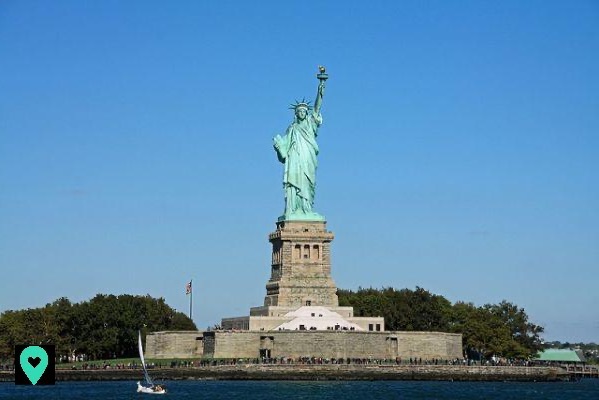 South Liberty Island, the Statue of Liberty waiting for you ! Symbol of New York, this monument is one of the most visited in the city. From the ferry you can see all the beauty of Miss Liberty and if you have the chance to approach her, do not hesitate to visit her!

In this photo the One World Trade Center shines ! Among all the buildings, we only see him for our greatest pleasure. The colors of the sunset add an extra touch to the photo.

New York from above 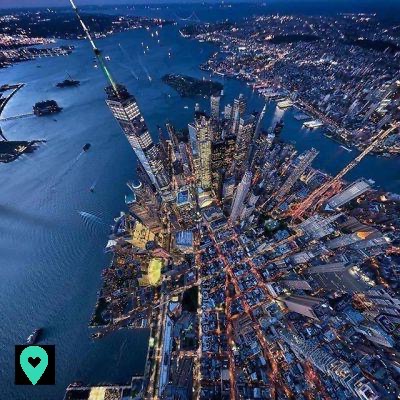 What better than to admire New York from above ? In this photo, you can see the tip of Manhattan and a magnificent perspective. The colors are radiant and everything is very well highlighted.

La skyline is one of New York's most symbolic images. In this photo, you can see the famous One World Trade Center, the tallest skyscraper in the city and its glass facade. 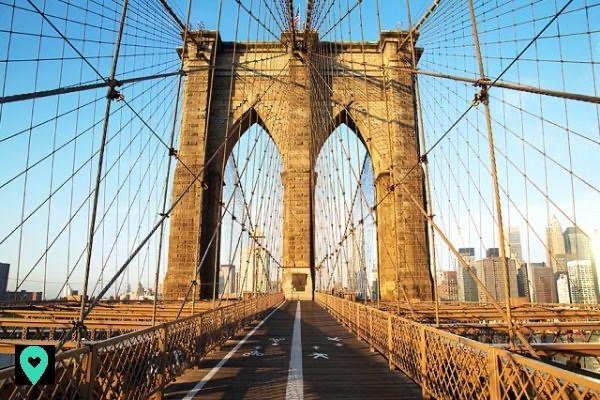 Here is a picture of the Brooklyn Bridge, the most famous bridge in New York! During its crossing, you will have the chance to walk over the East River and take pictures of magnificent landscapes: the skyline and many more! Walking on the Brooklyn Bridge is an amazing experience!

The Statue of Liberty at night 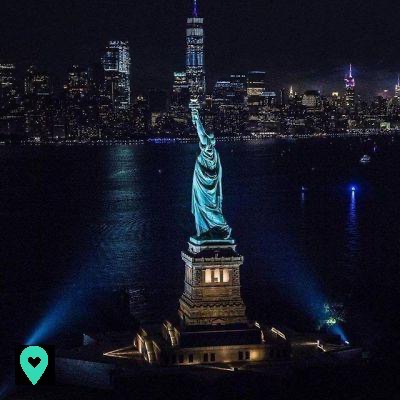 This photo of the Statue of Liberty “By night” is simply amazing! Miss Liberty shines brightly and is perfectly highlighted by the lights around her.

Panoramic view of the city 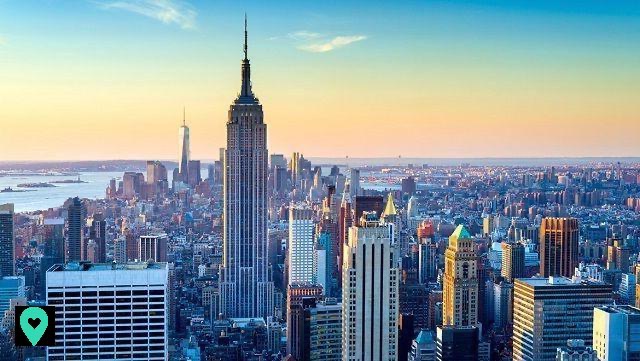 This photo New York panoramic offers us a magnificent view of the Empire State Building in the foreground and the One World Trade Center in the background. Photo taken just before a sunset, the colors of this landscape are quite simply unique! 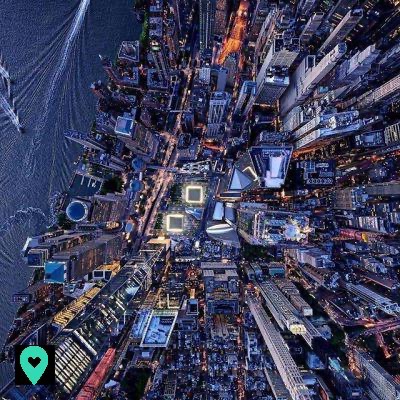 Here is a perfect capture of the 9/11 Memorial from the top ! The two pools are perfectly represented! These are located on the site of the two old twin towers destroyed following the attacks of September 11, 2001. 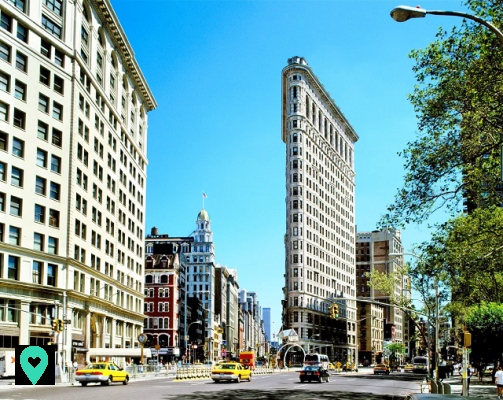 This New York photo shows thee Flatiron Building on a sunny day. This famous monument has a very atypical shape: that of an iron. The architecture of the Flatiron Building is unique in its kind and attracts many tourists who come to discover this authentic building. 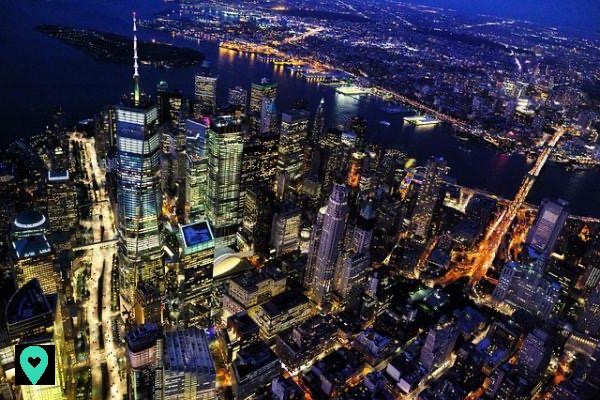 Here is a picture of New York magnificent taken at nightfall and from a unique angle. On this one, the twinkling lights of the night are perfectly highlighted and the One World Trade Center in the foreground puts us in awe! In this photo, it sparkles, it sparkles!

Le Top of the Rock 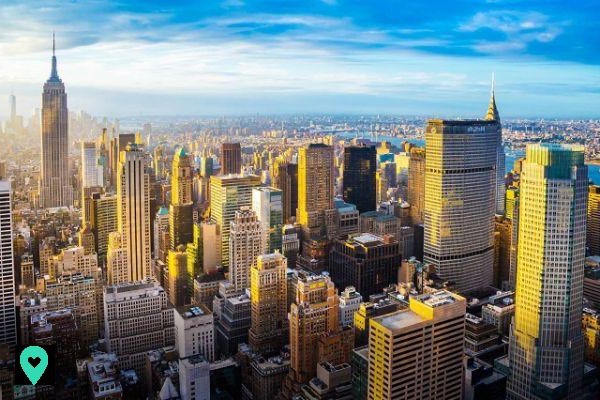 Here is a photo taken from the observatory of Top of the Rock. From here, a nice panoramic view of the city and the surrounding monuments can be seen: the Empire State Building on the right and the peak of the Chrysler Building on the left. This 360 ° landscape is simply exceptional! 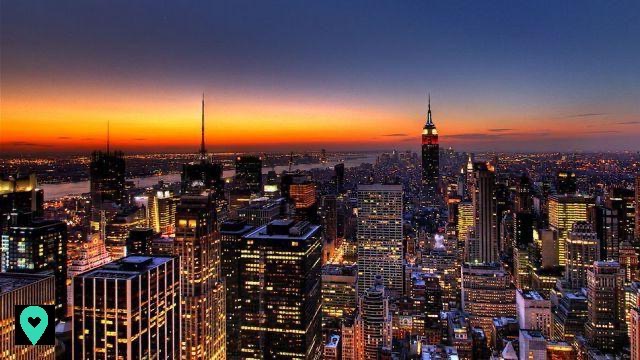 Whether day or night, New York is a resplendent city. In this photo taken at nightfall, we can see the Empire State Building illuminated in the background as well as all the twinkling lights of New York City. A real show of lights!

In this photo we can admire the Brooklyn Bridge in all its length and splendor! In the distance, the Manhattan skyline can be seen with the magnificent One World Trade Center pointing towards the sky. 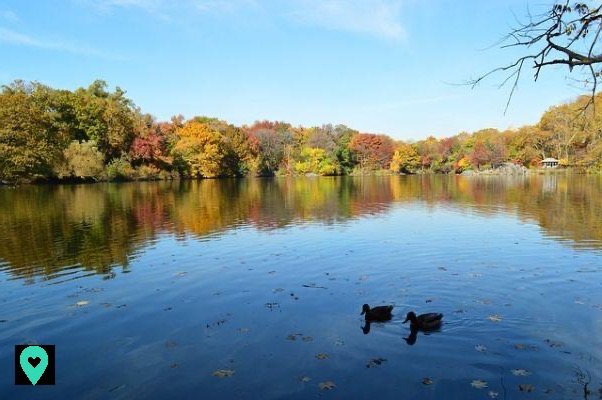 A Central Park, activities and visits are numerous. Among them, there is the discovery of a pretty lake where small boat trips are offered. In this photo, the immensity of the lake is well highlighted as well as the pretty fall colors. In fact, fall is the ideal time to take magnificent pictures of the park, think about it! 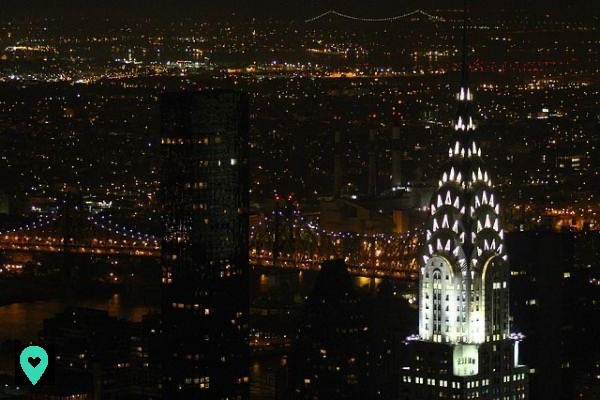 This photo shows the Chrysler Building, a famous landmark in New York. Built in steel, this building has its own characteristic: an arrow plated with silver metal pointing towards the sky. In this shot taken at night, you can also see all the twinkling lights of the Big Apple.

Here is a nice photo of New York and more precisely of the famous Manhattan skyline with the famous One World Trade Center. 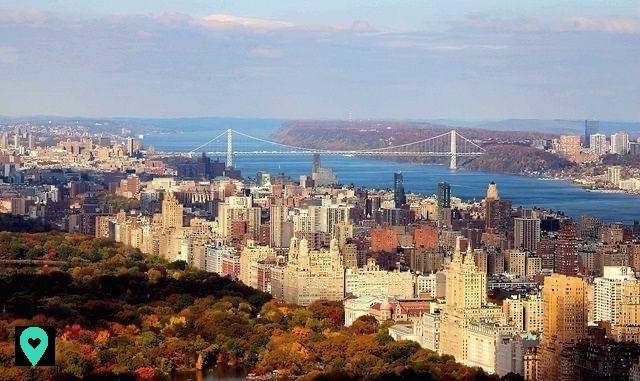 In this photo, the contrast between nature and the city is well represented. If the first is put forward by Central Park, the famous park of New York, the urban world is in the spotlighted by the many monuments and buildings surrounding it. A difference between two perfectly photographed worlds! 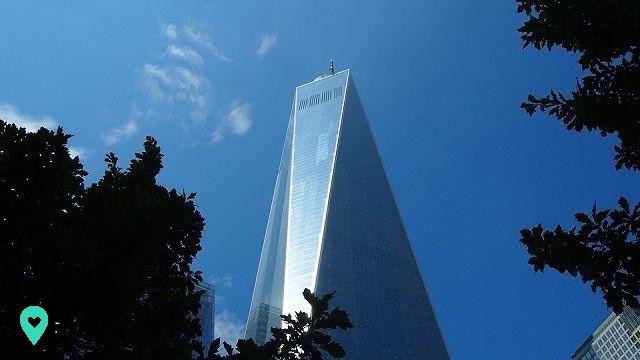 The colors of Central Park 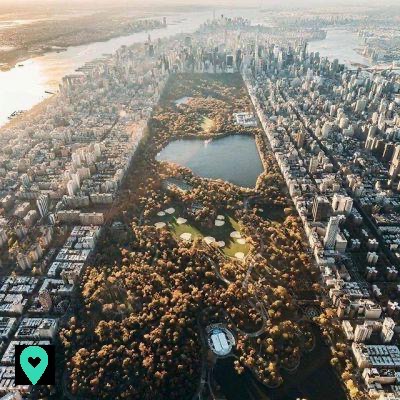 Here is a photo that highlights the magnificent fall colors present at Central Park during this season. Green, orange… everything is there! The landscapes are grandiose and are ideal for taking pretty pictures!

This photo gives us a nice panoramic view of New York : monuments, buildings… everything is perfectly captured.

After discovering the skyline by day, here it is by night. In this photo, we can see the various illuminated buildings and the Brooklyn Bridge, also all in light. The good weather being there, the natural lights make the landscape exceptional! 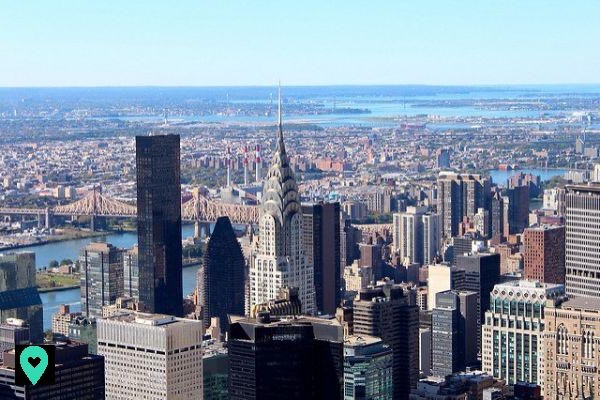 Here is a photo that shows the cityscape in all its glory. In the foreground, the arrow of the Chrysler Building points to the sky and all around, the various buildings complete this pretty new york landscape.

The pointe of Manhattan 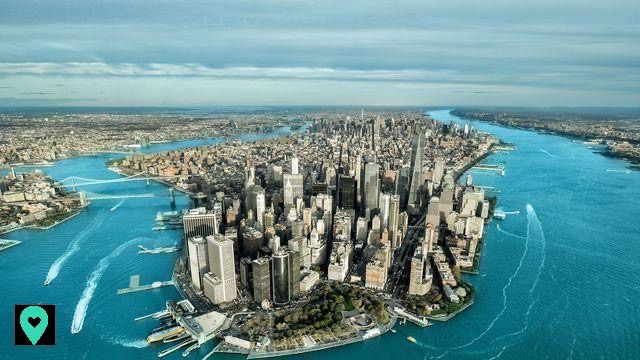 In this photo of New York, you can admire the Manhattan tip and some symbolic monuments of the Big Apple such as the One World Trade Center. 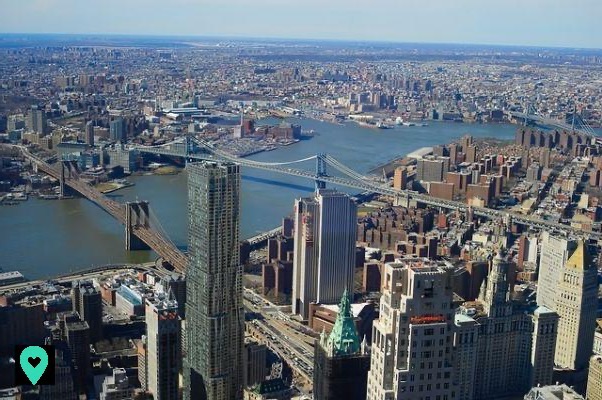 Want to see the vastness of Manhattan? Here is a photo that should please you! In this shot, you can admire the Manhattan neighborhood and the various buildings present. 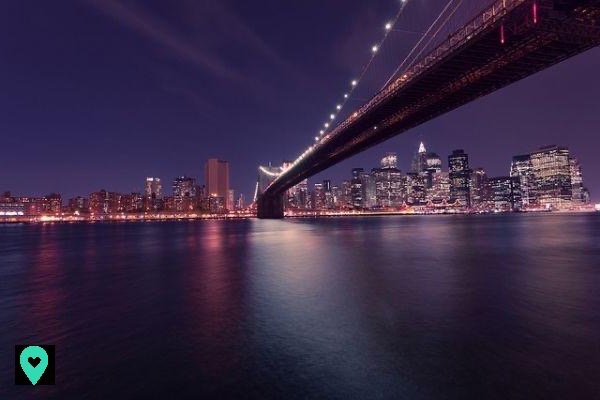 Le Brooklyn Bridge in all its length and in the distance the pretty cityscape of New York, here are the elements found in this photo!

Central Park in the heart of the city 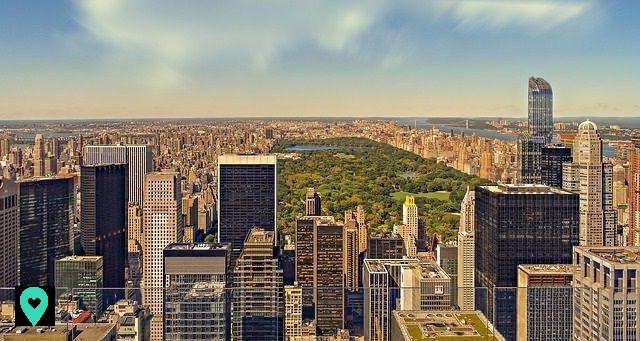 Central Park, Manhattan's green lung! This idea is also well represented in this photo. And yes ! As you can see, the park is right in the heart of the Manhattan neighborhood! 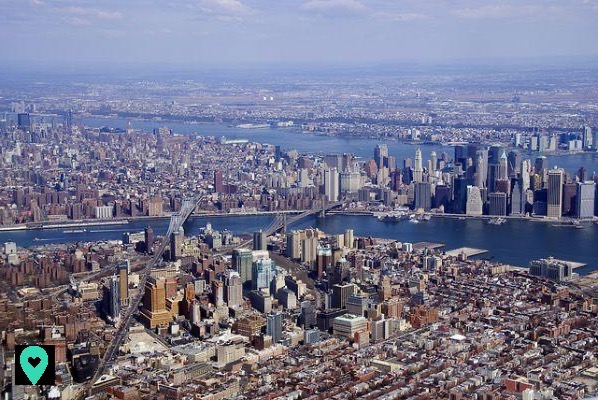 Here is a photo that will delight all people wishing to admire thearchitecture de New York from the top. Keep your eyes peeled and try to spot some iconic monuments!

So which photo of New York do you like best?

All the tips of Flushing Meadows Corona Park ❯