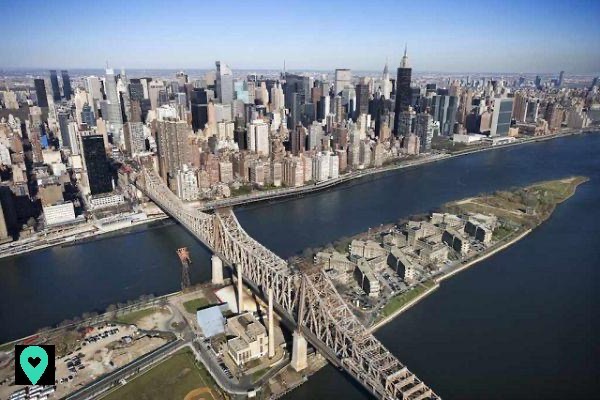 Roosevelt Island was named in 1973 in honour of Franklin Delano Roosevelt, the 32nd President of the United States. But before this official name, the island was renamed many times: Minnahanock before colonization, Manning's Island from 1666 to 1686, Blackwell Island from 1686 to 1921 and Welfare Island from 1921 to 1973. 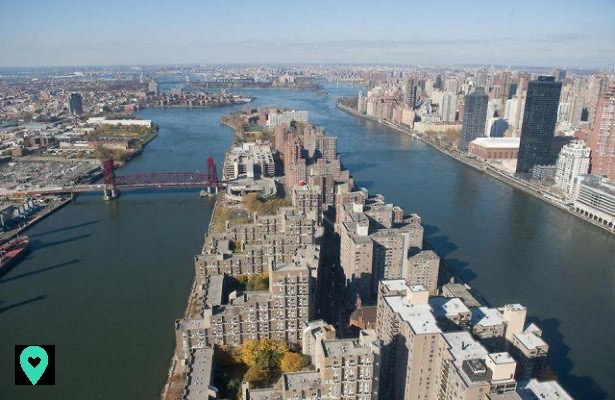 For many years, Roosevelt Island was occupied by a penitentiary, asylums and hospitals. But from 1970, the number of dwellings did not stop increasing and today residential dwellings have also appeared. At present, the island has Around 16 inhabitants.

What can we see on Roosevelt Island?

As you may have read in the previous paragraph, in the past, Roosevelt Island only housed hospitals, asylums and a penitentiary. But over the years, the island has grown and today it offers its visitors some magnificent and unmissable sites which deserve a little detour. Here's a look at the top things to see when visiting Roosevelt Island.

The ruins of Smallpox Hospital

Located in the south of the island, ruines du Smallpox Hospital will impress you! This former hospital closed in 1875 and was turned into a training center for nurses following this closure. But in the mid-50s, this center was abandoned. Today only ruins of this neogothic style building, but a renovation project is underway.

If you want to visit this place, know that it is closed by fences. You will therefore only be able to see the outside.

Also located in the south of the island, the Four Freedoms Park is a huge wooded park which offers its visitors a magnificent view of Manhattan. Keep your eyes peeled, because you can also see some monuments like the Chrysler Building or the Queensboro Bridge! The Four Freedoms Park also has a pretty lawn bordered by white granite paths and walls.

But the Four Freedoms Park isn't just a park. He is also a memorial in homage to Franklin Delano Roosevelt. Moreover, a statue of his bust is installed at the end of the park. 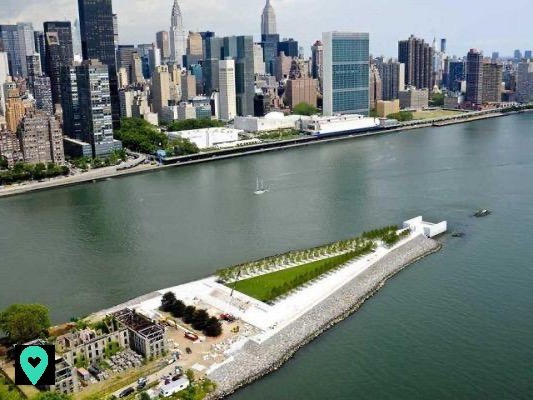 During your walk on the main street of the island, you will be able to see some recent residential buildings. Among them, there is one that stands out for its octagonal shape quite original: theOctagon Building. This building was inaugurated in 1842 and was the first asylum for women in the country.

At the northern tip of Roosevelt Island you can find the phare de Blackwell Island, built in bricks. This lighthouse is beautiful and its location is ideal: the point of view offered is magnificent and the place is very quiet. An interesting point to recharge your batteries and relax!

Other activities not to miss on Roosevelt Island

In addition to exploring its main sites, on Roosevelt Island you can also do some interesting activities such as:

How do I get to Roosevelt Island?

To get to Roosevelt Island, you can either take the metro or the Roosevelt Island Tramaway. Personally, I advise you to opt for the second solution! Why ? Quite simply because you can admire the island from above and it will also be the opportunity to live an incredible and friendly experience!

Since 1973, le Roosevelt Island Tramway assure la connection between Manhattan and Roosevelt Island and since 2003, this very atypical means of transport has been considered classic public transport, 100% New York and which can be used with the MetroCard.


Today the Roosevelt Island Tramway is very famous (we have seen it in several films) and it is the ideal means of transport to reach Roosevelt Island. The cabin of this tram can carry up to 110 passengers and the crossing (945 meters long) takes 3 minutes.

With this famous tram, you can travel at more than 76 meters high (climax). 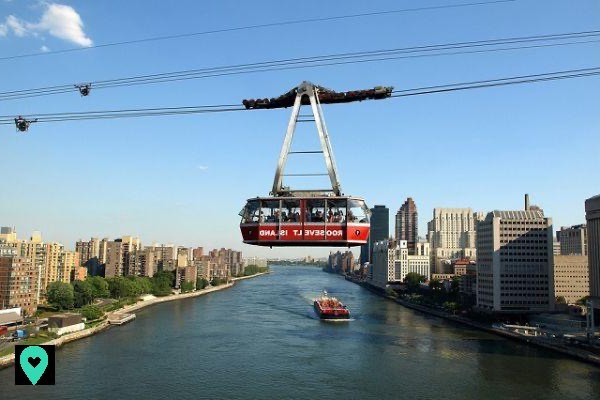 Roosevelt Island Tramway: how much does the crossing cost?

As previously indicated, this cable car is now considered a means of transport in its own right. You can therefore take it with your MetroCard which you use for the metro and the bus.

Otherwise, the ticket is $ 2.50 (for adults, children and seniors) and if you have a New York Pass, its entry is completely free!

What are the opening hours of the cable car?

If you want to go to Roosevelt Island, be aware that the cable car operates from Sunday to Thursday from 6 a.m. to 2 a.m. and Friday and Saturday from 6 a.m. to 3:30 a.m.. During these opening hours, a tram leaves every 10 minutes about.

As you can imagine, the Roosevelt Island Tramway is heavily used. I therefore advise you to avoid taking it at rush hours at the risk of being tight and not making the most of your short crossing.

Where to take the cable car?

If you are at Manhattan, the entrance to the cable car is quite easy to find. It is located at the corner of 2nd Avenue and 60th Street in Tram Plaza.

On the contrary, if you are on Roosevelt Island, you may find the entrance near the Queensboro Bridge.

What are the things to admire during the crossing?

During the 3-minute crossing, you can enjoy pretty landscapes and magnificent aerial views on the East River, Roosevelt Island or 2nd Avenue. So keep your eyes open and don't forget to take your camera with you to take some interesting shots!

If you want to know more about the Roosevelt Island Tramway, in particular its history, do not hesitate to consult our article dedicated to it! You will learn a lot of things and thanks to it, this famous means of transport will have no secrets for you!

How to get to the island by metro?

On the other hand, if the cable car does not appeal to you, you can use the metro. For this you will have to take the line F and get off at the station " Roosevelt Island" page (in French). 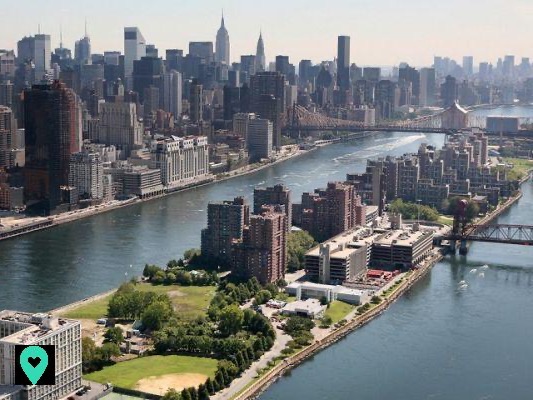 The good plan of the island

On your arrival, small red buses " Red Bus", Will allow you to visit the island so you don't miss anything! If you are interested, you will have to pay 25 cents. Interesting, don't you think?

During your trip to New York, I can only recommend that you make a small stopover on Roosevelt Island. First of all, to live a unique experience in the cable car, but also to discover a small New York island full of charm and many surprises.

So ready to go and conquer it?