Smoke from the California fires has crossed the country

For people living on the east coast of the United States, the fires that hit California for two weeks are less abstract. Indeed, the smoke from the fires including the "Camp Fire" and the "Woolsey Fire" - which burned thousands of hectares and left at least 87 dead and hundreds missing - crossed the United States to reach the east coast of American territory and even the Atlantic: last Monday, from the smoke was visible in the New York sky.

The National Oceanic and Atmospheric Association (in other words, the Oceanic and Atmospheric Observation Agency in charge of studying the atmosphere and the ocean) provided some edifying images. The latter show that plumes of smoke from “Camp Fire” and other fires in California crossed the territory and traveled nearly 5 kilometers to the northeast of the country and the Atlantic. Photos of New York also showed that smoke was visible from that state.

How did the smoke get through the country?

According to a CNN meteorologist, as soon as the smoke is trapped in the upper atmosphere, it is able to travel through the territory. On the other hand, the further away it is, the more complicated it becomes to distinguish it, because the particles disperse. The only way to see it is at sunrise and sunset. 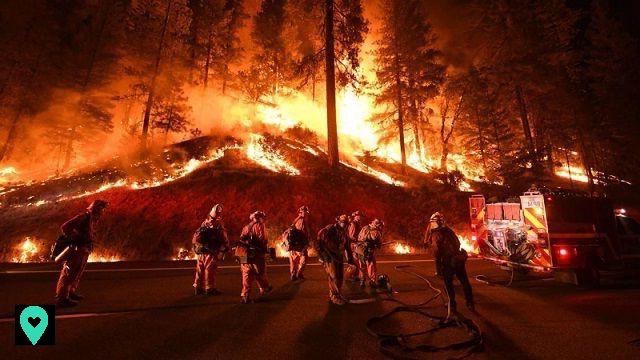 The fire of the "Camp Fire" broke out on November 8th and it is to this day, the deadliest and devastating the territory of California. Its toll is heavy: nearly 87 dead, hundreds of missing, nearly 62 hectares destroyed and more than 000 houses burned down.

The "Camp Fire" also largely destroyed the town of Paradise, a town of 27 people, located 000 km north of San Francisco in Butte County. In and around the city, 280 structures, the majority of which are dwellings, were burned down. Most of them were destroyed in the first hours of the fire, which devastated 13 hectares.

The origin of the fires is not yet determined, but victims have decided to take legal action against Pacific Gas & Electricity, an electricity supplier. According to the complaint, Sparks on a high voltage line of the company would be the cause of the fire.

The firefighters managed to come to the end of this devastating fire which burned more than 600 km² in the north of the state and razed the town of Paradise. The rains that have fallen on the west coast in recent days have helped put out the blaze, but have made it more difficult for emergency services to search for bodies.


The "Camp Fire" is one of the biggest and deadliest fires in the country. It is comparable to the "Big Burn" in the Rockies in 1910, but remains far behind the "Cloquet Fire" which killed 1 people in Minnesota in 000.