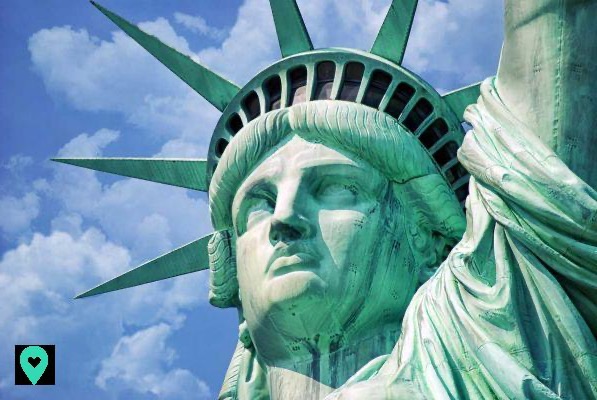 The history of the Statue of Liberty

A gift made in France

First of all, you are certainly well aware that the Statue of Liberty is a gift from France to the United States, right?

Indeed, "Liberty Enlightening the World", or "Liberty Enlightening The World" in English, was created by the French sculptor Auguste Bartholdi and offered to the American people on the occasion of the centenary of their Declaration of Independence. And the little anecdotal wink is that the famous sculptor called on Gustave Eiffel (yes, the creator of our famous Eiffel Tower) to make the structure of the statue. Once completed, it was offered to the United States and inaugurated in 1886. 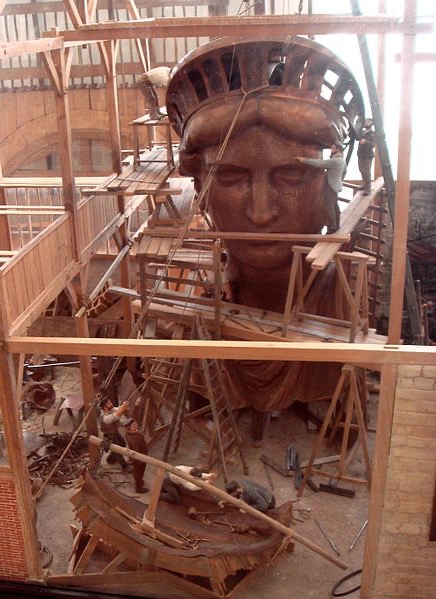 Today, and since 1984, the Statue of Liberty is part of the UNESCO world heritage.

But on top of that, and as I mentioned at the beginning of the article, she has become a real emblem of the whole country. Why ? Well quite simply because when they arrived, it was the first thing that immigrants could see, telling them that they were finally arriving on the American territory. A true historical symbol, therefore.

Some figures and anecdotes

As you can imagine, the Statue of Liberty must weigh very heavy ... Also, did you know that it weighs over 200 tons? In fact, if you think about it, it's pretty normal, given that it measures 92 meters high and 10 meters wide!

At the feet of the statue, you can see a bronze plaque with the poem “The New Colossus”, written Emma Lazarus, engraved. You will also see broken chains there, symbolizing the end of slavery. Then, in his left hand, the Statue of Liberty holds a tablet indicating the country's independence date, the July 4 1776.

And finally, do you know what the 7 branches of his crown represent? Those are the 7 continents and seas of the planet. And each of these branches weighs 68 kg! 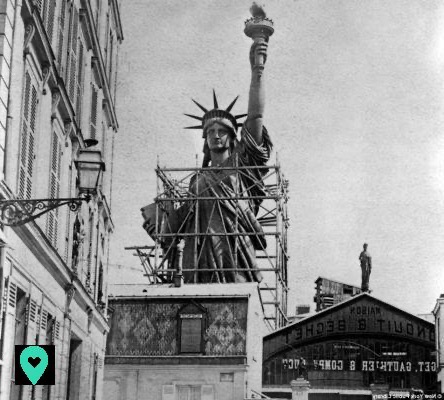 Safety restrictions over the years

Following the attacks of 11 September 2001, access to the Statue of Liberty was unfortunately suspended, for safety reasons. It was not until 2009 that visitors were allowed to enter again.

Then, in 2012, access was once again internet following theHurricane Sandy, also for security reasons. It was only a year later, in July 2013, that the statue reopened. Unfortunately, and since 1916, access to the balcony of the flame remains prohibited.

Getting to the Statue of Liberty

Take the ferry to Liberty Island

To see and visit the Statue of Liberty, head to Liberty Island! And for that, you will have to board a ferry from Battery Park, in Lower Manhattan. Also, you can take New York subway line 6 to Bowling Green stop, or R line to Whithall Street station.

And if you want to leave from New Jersey, it's at Liberty State Park that you will have to surrender in order to board.

The company you take to get to Liberty Island is Statue Cruises, and they have departures every 30 to 45 minutes. That said, the best is to get there as soon as it opens, i.e. around 8:30 am. You will avoid too dense a crowd, and have time to enjoy quietly once there. 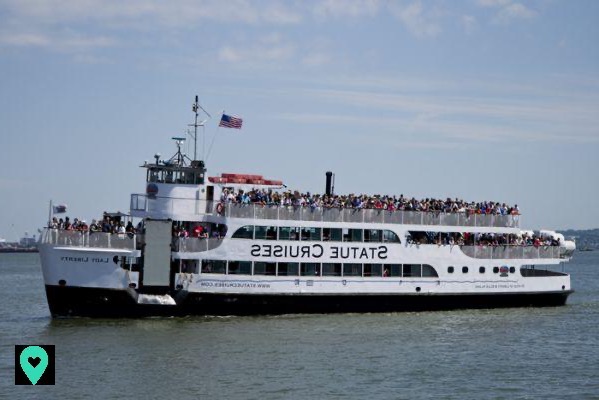 Before boarding, know that you will have to pass several security checks. So plan to be a little early, and don't forget to bring an ID with you. Otherwise, you will not be able to board the boat. Also, forget about large backpacks, which are not allowed. So take the bare minimum with you, and leave the rest to the hotel. Otherwise, you can also leave your belongings in a dedicated locker for a few dollars.

On return, note that the boat will make a stopover at Ellis Island. Also, and if it is not too late, I strongly advise you to go and check it out! Enter the museum on the island, and retrace the journey of many immigrants who came to set foot here before reaching the Big Apple.

Note that Liberty Island as well as the statue itself are open every day of 7h45 to 16h30. And of course my advice will be once again to arrive as early as possible. This will save you a large crowd or long waiting time. Besides, you probably have other plans for the afternoon, don't you? Like going to visit Ellis Island and its immigration museum !


Visit Statue of Liberty: what to see once there?

Once you arrive at Liberty Island, you will undoubtedly be amazed by the Statue seen from this close. So keep on approaching, and so go inside! You will have the opportunity to visit the Pedestal as well as the crown de la Statue, which I recommend to both of you. 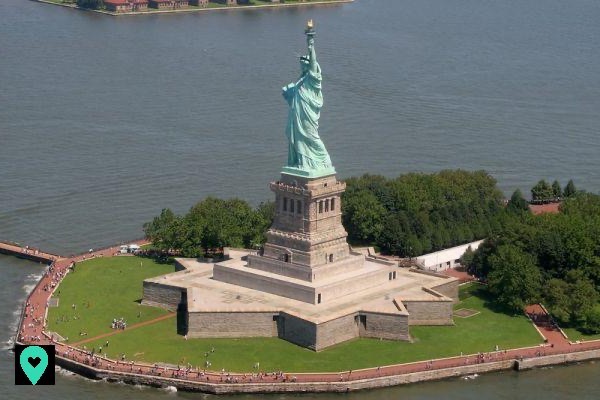 The Pedestal of the Statue of Liberty

Upon entering the statue, you will come to a large room where you can admire the replica of the flame that the statue holds in its hand. Then the Pedestal is the first level you will arrive at when you climb into the statue. You can take the opportunity to admire the view offered on the surroundings and Manhattan.

Also, I want to inform you that after the Pedestal, the climb is done on foot and no longer by Elevator. So if you are with small children or people with reduced mobility, this is probably not the best plan.

The crown of the Statue of Liberty

If you have the opportunity and the motivation to continue your ascent on foot, then let's go for the crown! Join a group of 15 guests maximum, and climb to the top of the Statue of Liberty. Closed for a long time after the attacks of September 11, 2001, it has been open to the public again since 2009.

You will have a unique view, but above all will live an unforgettable experience, that's for sure! Of course, this will not be without effort, since there is still close to 400 marches to climb… Or the equivalent of a 27-storey building, no less! Doesn't that scare you? So don't forget your water bottle and a good pair of shoes, it goes without saying!

My last little advice: take your precautions sanitary facilities before starting your ascent, because the Statue does not have a toilet!

Which ticket to take for a visit to the Statue of Liberty?

Buy a Pass in advance

Do you want to organize yourself and therefore buy a pass in advance? It's a very good idea. Also, know that New York Pass et New York City Pass both include the ferry ride to Liberty Island. So you don't have to worry about choosing your pass.

Nonetheless, if this is your first visit to New York, I would highly recommend taking a New York City Pass, which offers 40% off the price of attractions. You can order it online by clicking here.

If this is your second visit, you can compare the offers of the two passes. For that, I invite you to consult my article which is dedicated to them. 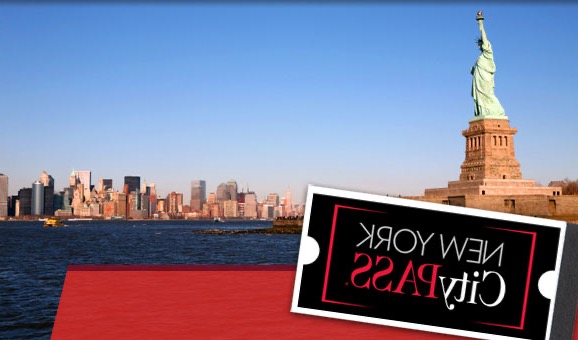 Book tickets to visit the crown

That said, note that if you want to climb into the crown none of the passes will help. You will need to book tickets in advance (and at an additional cost!). And well in advance, because the number of entries per day is limited, and places are crowded months in advance! Also, I advise you to reserve yours between 2 and 4 months before to get there.

Finally, note that the crown is accessible every day (except December 25) until 16:30 p.m., and that children must be accompanied by an adult. However, those below 1,20m will not be allowed to climb.

As I said at the start of the article, you will need to go through security checks before boarding the ferry that takes you to Liberty Island. Also, only small bags will be allowed. So forget about bulky items, since you will only be allowed to take a bottle of water, pharmaceuticals and your camera or camera.

Also keep your identity papers and your ticket, of course.

Good plan: see the Statue of Liberty for free

You don't have the time or the money to visit the Statue of Liberty? Don't panic, know that you can still see and admire it. Indeed, you can simply go to Battery Park. From there, you can catch a glimpse of it and tick that off your list of things to see in New York!

What if curiosity devours you but your plans are different? Know that the ferry to Staten Island will allow you to get a little closer to the famous Statue. And the good point is that this ferry is free for everyone, every day! So take the opportunity and get on board, for a journey of about twenty minutes. The top? Take the ferry at the end of the afternoon, just to admire the Statue of Liberty as well as the Manhattan skyline surrounded by superb pink colors. 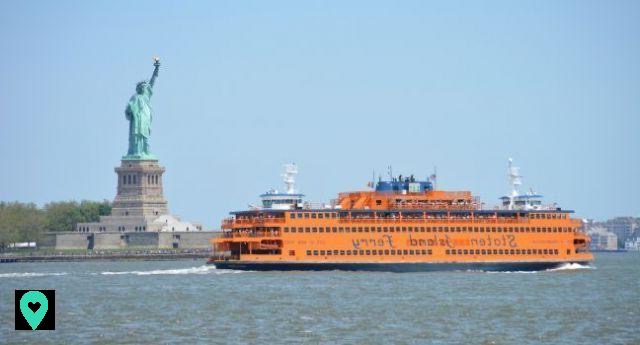 And here ! You no longer have any excuse for not paying the Statue of Liberty for a little while! And believe me, you won't regret it!

New York cheap accommodation: find the hotel of your dreams that suits your budget! ❯

add a comment of Statue of Liberty tour: a must-see attraction