The Central Park ice rink: how to skate there in winter? 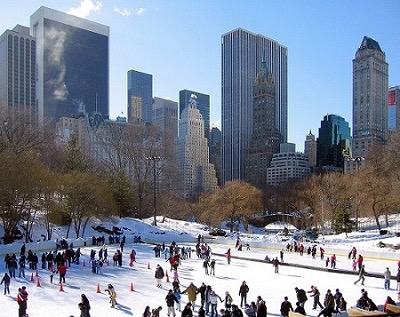 Central Park ice rink: ideal for launching on the ice in the middle of the park!

From the end of October until April, two skating rinks open their doors in Central Park: the Wollman Rink to skate with family, friends or as a couple and the Lasker Rink dedicated to ice hockey.

Here is a presentation of these two rinks. 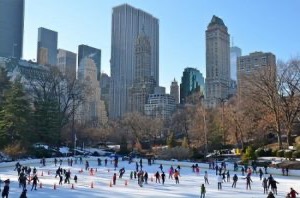 Located southeast of the park and on the Fifth Avenue side, the Wollman Rink is one of the most beautiful ice rinks in the world. The latter offers its visitors a magnificent setting in the middle of Central Park with a view of the skyscrapers of New York. It is also a place where it is very easy to skate, because the space it offers is very large. The open-air ice rink by Wollman Rink is therefore pleasant and very romantic for couples.

A few words of history on this ice rink

Wollman Rink's ice rink has opened in 1949 and for several years it hosted outdoor concerts, then the Wollman Theater moved in. Today she has become a real attraction where locals and tourists like to spend time. This rink has also appeared in several films such as Love in New York or Mum, I missed the plane again.

Good to know: Before becoming today's ice rink, the Wollman Rink underwent some renovation in 1980. It then reopened in November 1986.

Practical information for skating at the Wollman Rink ice rink

Wollman Rink ice rink opens from October 23, 2018 until the beginning of April. If you want to hit the ice during your stay in New York, here are its opening hours:

Admission to the Wollman Rink ice rink is chargeable and the rate applied depends on the day of the week. So, if you decide to skate on Monday, Tuesday, Wednesday or Thursday, the asking price is $ 12 for adults. For children under 11 the price is $ 6 and for seniors it is $ 5.

On Friday, Saturday, Sunday and on statutory holidays, the rates change: $ 19 for adults, $ 6 for children under 11 and $ 9 for seniors.

To these rates, consider adding the price of the skate rental: $ 9. And if you want to go there as a spectator, you will have to shell out $ 5.


Practical information: to pay, use only liquid. 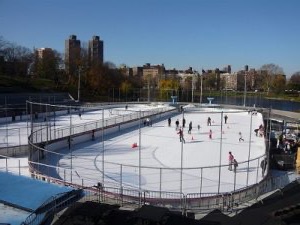 Smaller and less popular As the Wollman Rink, the Lasker Rink is located in the northern part of Central Park and is home to an ice hockey and skating school.

Lasker Rink ice rink has opened 1966 and is known to be a less popular and more economical rink than that of Wollman Rink.

It is therefore a good compromise if you want to go out on the ice away from the crowd while enjoying a beautiful view of the park.

Additional information: in summer the Lasker Rink is used as a swimming pool and in winter it turns into an ice rink; a dual function that she was the only one to hold for several years in the United States.

Practical information for skating at the Lasker Rink ice rink

Like Wollman Rink's rink, Lasker Rink's opens from the end of October, but closes its doors a little earlier: during March.

For its opening hours, these depends on the day. It is therefore open to the public:


How much is admission ?

The entrance fees for the Lasker Rink ice rink are as follows:

As for the Wollman Rink rink, the skate rental is to be added: $ 7.

As you can see, the rates charged for the Lasker Rink rink are lower than the rates for the Wollman Rink rink. Depending on your preferences and budget, you just have to choose the one you prefer!

Skating in Central Park: an activity not to be missed!

If you're in New York City between October and April, try to schedule a time slot to go skating on one of the Central Park rinks. This activity very popular with locals and tourists will allow you to have a good time and skate in the middle of this famous park while enjoying a beautiful view of the buildings of the city.

Going out on one of the open-air ice rinks in Central Park is therefore to be included on your list of activities! Fun guaranteed!

add a comment of The Central Park ice rink: how to skate there in winter?