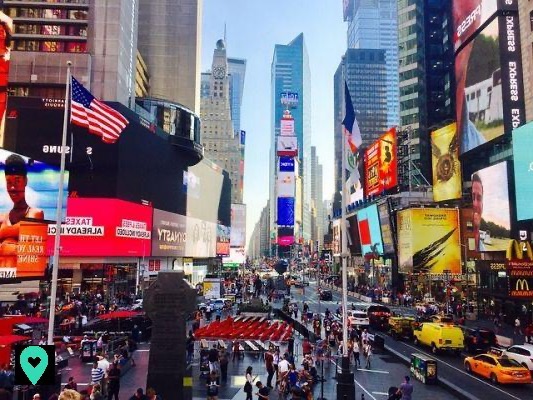 Before being renamed Times Square, this district was called Longacre Square in reference to the transport industry and in particular that of the booming horse-drawn carriages before the XNUMXth century.

But 1904, this district was renamed Times Square. This name change took place at the same time as the New York Times moved into the Times Building, now known as One Times Square. Shortly after, the first advertisement appeared on the corner of a bank building. 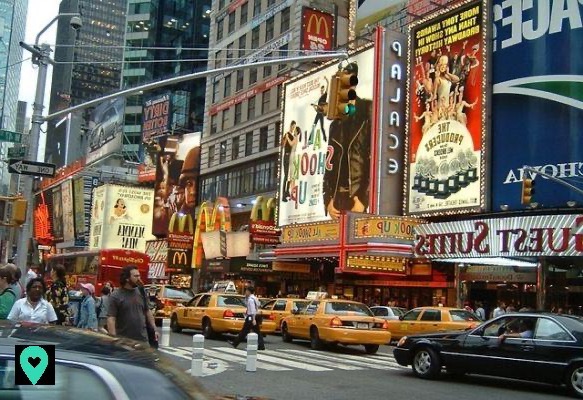 In the 1920s, Times Square became a famous cultural center due to the presence of theaters, shows, music halls, hotels… This crossroads also became the scene of major events and gatherings. At that time, big names like Charlie Chaplin or Fred Astaire were also associated with this New York neighborhood. And yes ! About 280 shows were performed on stages in Times Square during this period.

In the 50s, the image of Times Square tarnished and the area was considered a dangerous place because of prostitution, sex shops… But in the 90s, the mayor Rudolph Giuliani decided to improve the image of the district by closing the “bad” establishments and restoring security.

Today, Times Square is a dynamic, energetic neighborhood and very popular with locals and tourists. Shops, restaurants and other establishments have opened their doors and many activities are organized throughout the year.

Times Square and the arts

In a movie, a video game, or in a painting, you might have recognized Times Square. Indeed, this district inspired several artists like Daniel Authouart, a French painter who made several paintings showing this famous crossroads. Also in films (Spider-Man 3, Men in Black, American Pie, Happy New Year or I am a legend), scene (s) were filmed in Times Square. Finally, in video games like Prototype or Ultimate Spider-Man, this neighborhood can also be seen.

In Times Square, the animation is constant and the crowd constant. During your stay in this district, take the time to permeate the atmosphere and discover this crossroads with many surprises! But what to do and see in Times Square? What are the things not to miss? Here is an overview of the must-sees of this New York neighborhood!

A little advice: don't forget to take your camera to keep track of your passage!

Climb and sit on the steps of TKTS

Here is the best place to enjoy a unique perspective on the neighborhood: TKTS steps free access 24/24. Located between 7th Avenue and Broadway, this staircase was built in 7 by the famous TKTS ticket office and offers you a unique view of Times Square from more than 7 meters high! In addition to the view, once at the top, you will be able to see the different light screens, the magical atmosphere of this district and people in disguise! 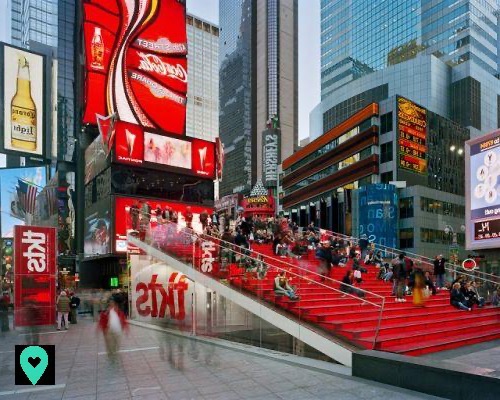 This is the main activity on Times Square: go shopping ! It must be said that the shops are very numerous: between fashion stores, souvenirs and flagship stores, Times Square has a lot to offer you. Among the famous stores you can find:

Take a selfie with the Naked Cowboy

In Times Square, you will be able to meet atypical characters including the famous Naked Cowboy known worldwide ! His particuliarity ? He wears white cowboy boots and hat, also white kangaroo briefs and a guitar; an outfit that he wears every day and in all weathers! So, if you meet the Naked Cowboy, don't hesitate to pose next to him and leave with a photo and an autograph of this "naked cowboy"!

Attend a Broadway musical is also one of the flagship activities of Times Square! Shows like The Lion King, Mary Poppins, Cats, The Phantom of the Opera or Aladdin are often on the bill. During your stay in New York, I can only advise you to go see a musical: the sets, costumes and staging are grandiose! And if you're not bilingual, that's okay. Just let yourself be transported by the spectacle! 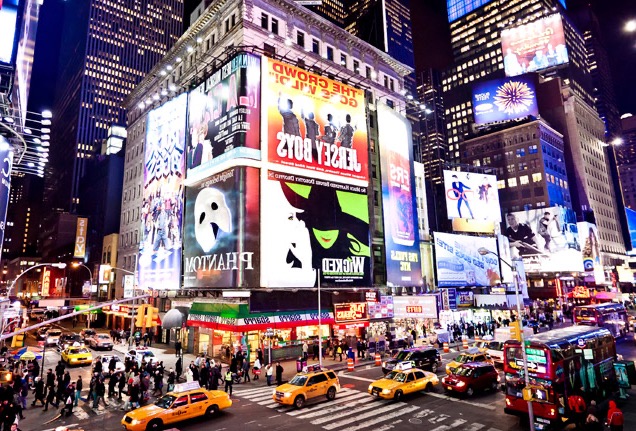 In the heart of Times Square or a stone's throw from this district, you can also visit museums such as Discovery Times Square, an exhibition hall where you can find temporary exhibitions, events ..., the museum of Madame Tussaud where wax statues representing American and world stars (singers, politicians, sportsmen ...) are exhibited and the museum Ripley’s Believe It or Not!, an astonishing place that highlights strange objects.

The various events organized during the year

Throughout the year, several events take place in Times Square.

So for the Valentine's Day, many couples gather in Times Square to celebrate their love. In November, the Macy's Thanksgiving Day Parade, a colorful parade that passes through Times Square. Finally, for the 31 December, thousands of people gather in this district to celebrate the transition to the new year. Entertainment is organized and as soon as the crystal ball appears, all those present count up until midnight. The party is then in full swing until the early hours of the morning.

Where to eat and go out in Times Square?

There is no shortage of restaurants in Times Square! Whether you fancy lunch or dinner, you are bound to find an establishment that suits you. So, if you want to eat in an atypical restaurant, I recommend Bubba Gump (1501 Broadway), an establishment with a warm atmosphere and inspired by the movie Forrest Gump, which mainly serves dishes based on seafood and fish. Burgers, salads, sandwiches and pasta are also on the menu. In Times Square you will find another seafood restaurant: Red Lobster.

Do you want to taste an American dish? See you at Junior's (1515 Broadway) where you can eat a delicious cheesecake!

Finally, to live a magical experience, I recommend the bar / restaurant The View where you can sip a cocktail while enjoying a panoramic view. You will be seated on the 48th floor of the Marriott and you will turn. Indeed, the bar is installed on a rotating floor. You will be able to see the Empire State Building, Rockefeller Center and many more! In total, it takes an hour to complete the tour. Remember to book in advance to make sure you have a seat near the window.

Times Square: where is this neighborhood?

Times Square is located between 42nd street and Broadway in the Manhattan neighborhood. In 2009, most of Times Square became a pedestrian zone (no motorized vehicles are allowed).

Here is a small map to help you locate this crossroads:

All you have to do is go and discover Times Square!

Veterans Day: what to do during this holiday? ❯